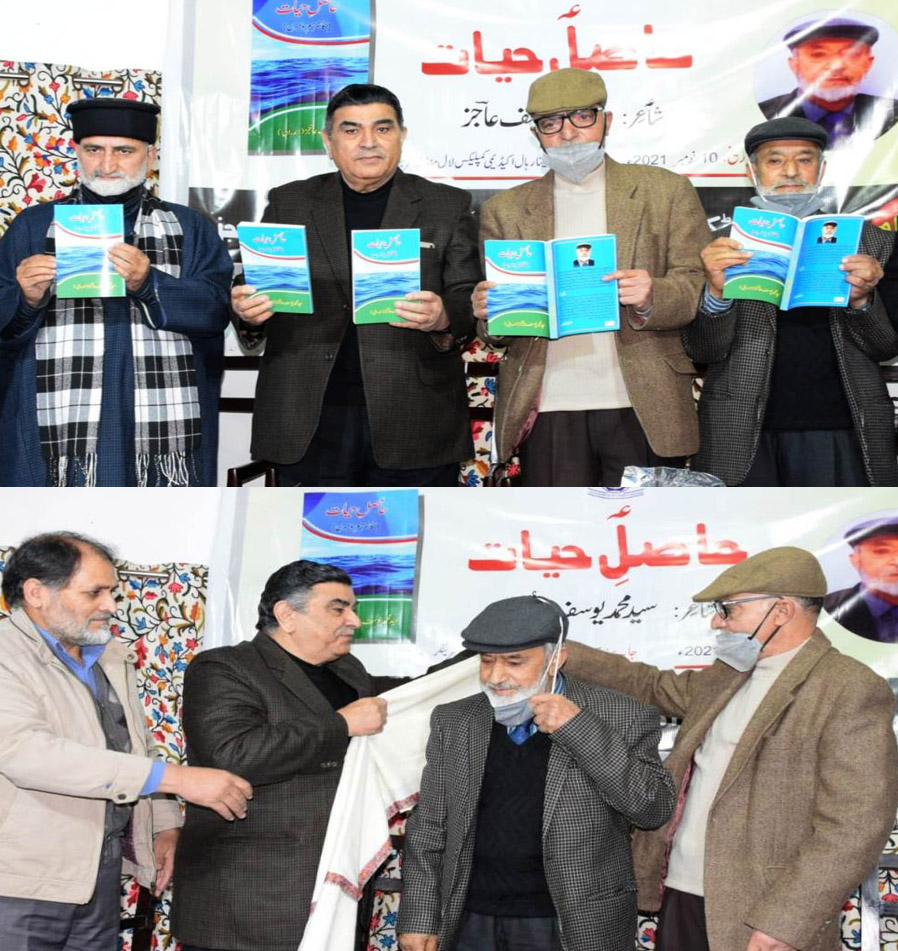 SRINAGAR, NOVEMBER 10 (KINS): ‘Hasil-i-Hyaat’, a Kashmiri poetry collection of Syed Mohammad Yousuf Aajiz was released today at a function organized by Jammu and Kashmir Academy of Art, Culture and Languages (JKAACL) in Seminar Hall of the Academy at Jawahar Nagar in presence of galaxy of literary persons besides renowned poets and writers of the Valley.

Justice (Retd) Bashir Ahmad Kirmani was the chief guest on the occasion. He greeted Aajiz for coming up with the book, and termed it as an addition to the Kashmiri literature.

He said Aajiz’s poetry is in-depth and the book is live example of his strong hold on love and affection for Kashmiri literature and culture.

Other participants also praised the writer for his noteworthy collection and contribution to the Poetry section of the Kashmiri language.

The opening ceremony began with recitation of verses from holy Quran by Dr. Shabnam Showkat while as inaugural ceremony was conducted by Dr Farooq Anwar who welcomed the guests while speaking on importance of organizing the function.

On the occasion, the book review was presented by Zahid Farooqi, who recited nad quoted various couplets from the book.

Meanwhile, expressing his gratitude to the JKAACL for organizing the book release event, Syed Mohammad Yousuf Aajiz said that Academy has been always on forefront to provide opportunities to poets and writers and encourage them.

Lauding the efforts of his daughter Rehana Kounsar, Aajiz said “it is because of her endeavours that my writings got the shape of book ” Hasil i Hyaat”.

Rehana Kounsar in her emotional speech gave detailed account of her efforts which she put in making the dream of her father come true.