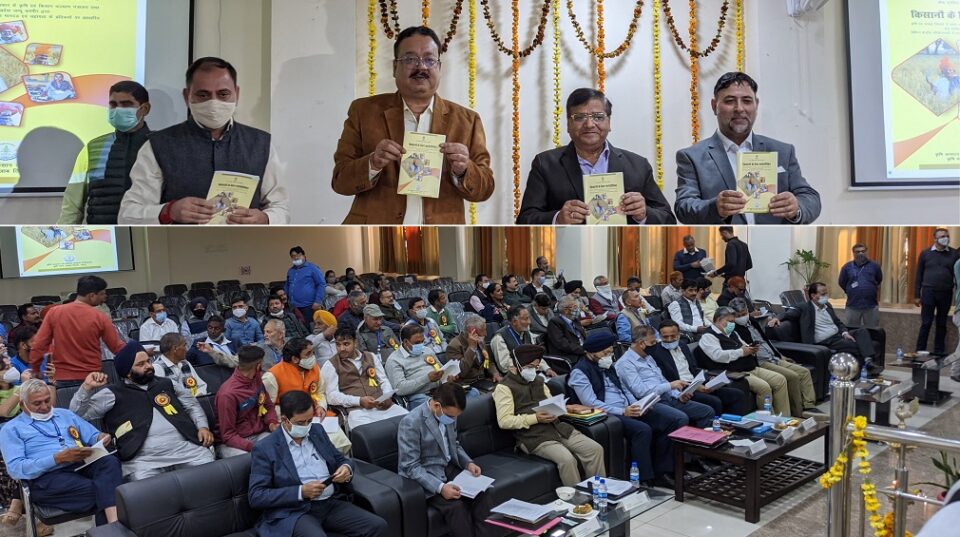 JAMMU, NOVEMBER 11 ( KINS): Principal Secretary Agriculture and Farmers Welfare, Navin K Choudhary, also Vice Chairman, Jammu and Kashmir Advisory Board for Development of Kisan, today had an interactive meeting with the newly nominated members of the Board from Jammu division.

Professor J.P. Sharma, Vice Chancellor, Sher-e-Kashmir University of Agricultural Sciences and Technology (SKUAST), Jammu, who is also an ex-officio member of the board, was the guest of honour on the occasion.

The objective of the meeting was to facilitate exchange of views and raise crucial farmers’ issues of the region besides highlighting the mission and objectives of the board.

Principal Secretary expressed concern over loss of farmer’s crops due to havoc wrecked by recent hailstorms, rain and snowfall. He directed the concerned departments to finish surveys within a week’s time for providing relief to the affected farmers. He asked the members of the board to encourage farmers to insure their crops to safeguard their interests in crucial times of weather vagaries. He also reviewed preparations being made by the department for Rabi season.

Principal Secretary said that the department is working ambitiously towards facilitating and boosting oilseed production in the UT which will immensely help agriculturalists raise their economy. He expressed confidence that Kashmir region would be able to achieve ten times more oilseed production this year besides record production in Jammu region is also expected.

It was informed that special crates have been procured by the department for improved logistics of fruits, which would also reduce losses previously incurred due to transportation and handling. Besides, large number of high density plants have been arranged by the department to give boost to horticulture in the region.

It was decided in the meeting that Pashudhan Mela, a marketplace for livestock, would be organized by the Animal Husbandry department on Sundays of every month.

Vice Chairman sought feedback from the members about the government schemes and the challenges being faced during their implementation in their respective districts.

The members, hailing from all the districts of Jammu province, also interacted with heads of Agriculture and other allied departments involved in farmers’ welfare schemes and shared their experiences.

Principal Secretary directed all the heads of departments to conduct monthly visits of remote areas of the region and organise awareness camps. He asked them to sort out issues requiring on the spot redressal in coordination with local bodies and members of the board.

Later, Principal Secretary along with other dignitaries released a hindi booklet titled ‘Kisanon Ke Lie Margadarshika’ for schemes and programmes of Department of Agriculture and Farmers Welfare.( KINS)

PMAY-U to ensure universal housing in Jammu and Kashmir