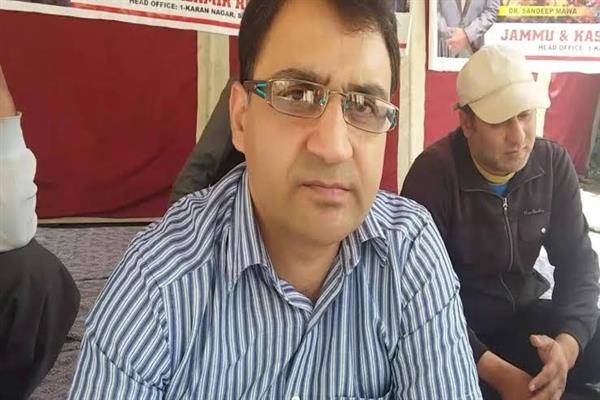 Srinagar Nov 11: On last Monday Dr Sandeep Mawa, a Kashmiri Pandit, was at his shop in old city Srinagar at 3 pm when he was told by the police that they had inputs he might be attacked. Fearing for his life, he immediately drove his car home. He left his another car XUV outside his shop.

At around 8 pm when his salesman Mohammad Ibrahim Khan, 45, a resident of Eidgah Srinagar, boarded the XUV of Dr Mawa, he was attacked. Several bullets hit his body. Khan was taken to the hospital in a critical condition but breathed his last there.

Dr Sandeep Mawa said he was at the shop till 3 pm on Monday and left his SUV there. “The police told me that there are inputs of my killings. I immediately drove home in another car. In the evening I got to know that my salesman has been killed,” he said, who has been provided security in view of threats to minorities.

A doctor by education, Dr Mawa returned to Kashmir in 2019. While condoling the demise of his salesman, Dr Mawa said he will provide all possible help to the bereaved family.

In the last six weeks, at least 14 civilians have been killed. Among them seven were Kashmiri Muslims, four non-local labourers, two Kashmiri Pandits and one Sikh woman which has created a fresh fear in the valley.

Khan’s family members said he was targeted as attackers may have mistaken Khan as Dr Mawa.

“When he stepped in the car, Khan was attacked. It clearly seems that they had come to target Dr Mawa but killed Khan by a mistake amid the darkness,” Khan’s relative Fayaz Ahmad told news agency Kashmir Indepth News Service (KINS).

Earlier on October 05, a prominent Kashmiri pandit Dr Makhan Lal Bindroo was killed in his medical shop. His son Dr Sidharth Bindroo had said that his father received threats but he did not leave Kashmir because of his love for Kashmir and its people.

Another prominent Kashmiri Pandit Sanjay Tickoo was also put under security cover following Dr Bindroo’s killings. Last month when we met Tickoo, he told this reporter that he was told by the police that they had inputs that he might be targeted.

Following the recent civilian killings, many Kashmiri Pandits either prefer to stay in their homes or have left Jammu.

A police official said that many Kashmiri Pandits have been given security following recent killings. “It seems, the salesman of a Kashmiri pandit was killed by the mistake,” the official added.

Meanwhile, security has been intensified across Kashmir following the recent killings.

At least 5000 additional paramilitary forces have been deployed in the valley with 3000 alone in Srinagar where the maximum civilian killings took place.

In Srinagar, new bunkers are being raised and frisking has been intensified. Few years before, Srinagar was once considered a free militancy district but the maximum recent killings of civilians took place here.

Forces have built up several permanent bunkers in various parts of Srinagar. (KINS)

3,195 gram panchayats to be provided with internet connectivity in J&K