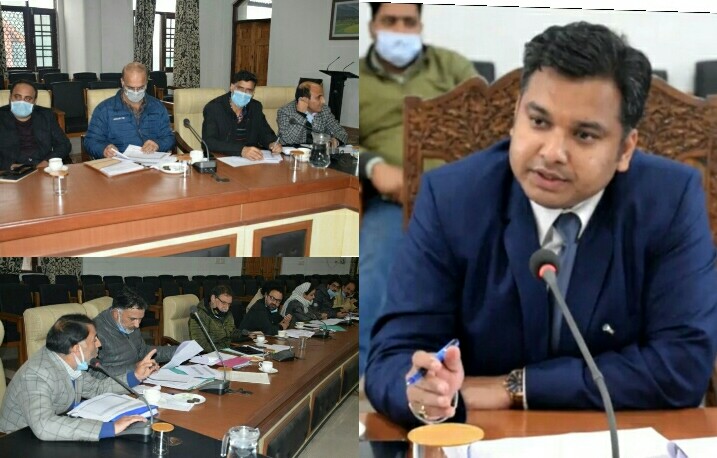 ANANTNAG NOVEMBER 12( KINS): The Deputy Commissioner (DC) Anantnag, Dr Piyush Singla today reviewed the execution of works under District CAPEX and Back to Village plans at Dak Bungalow, here. The implementation of works by Rural Development and KPDCL were also reviewed.

SE, KPDCL Anantnag informed the chair that 311 works have been authorised under District CAPEX plan of which more than 96 percent have been tendered and works are under execution as per timeline. 92 percent of the works taken up under Back to Village Program have also been tendered.

ACD Anantnag informed the chair that a total of 1925 works are being executed by the department under CAPEX plan. Out of these more than 75 percent works have already been tendered. Most of these works are already under execution and shall be completed as per projected timeline.

He also informed the chair that under back to village program out of 850 works, more than 85 percent have been put to tenders. Work is under execution on most of these projects and 145 works have already been completed.

Threadbare block wise discussion on execution of works was also held. Dr Singla blacklisted 4 contractors for unnecessary delay in execution of works and wasting public resources. Further the salary of one official was also stopped on grounds of inefficiency and non-performance. The DC warned of stern action against any official whose disbursal of work is inefficient.

The DC, while reviewing the execution status of works in detail, directed the officials from both departments to ensure strict action under rules is initiated against any contractors unnecessarily delaying the execution of works.

He further said that timely completion of works under their supervision are key parameters for performance assessment of officers and defaults in this regard would not be tolerated. He laid emphasis on timely expenditure of funds that have been earmarked for these plans. He further stressed on inter departmental coordination for execution of works and any hindrances on this account must be brought to the notice of district administration.

He also directed the officials to sensitize their staff and masses regarding the importance and benefits of the planned works. He emphasized their role in addressing any local issues in implementation of these works.

The meeting was attended by ADDC, CPO, Ex. Engineer KPDCL, Ex. Engineer REW, BDOs, AEs and other officials of RDD and KPDCL among others.( KINS)