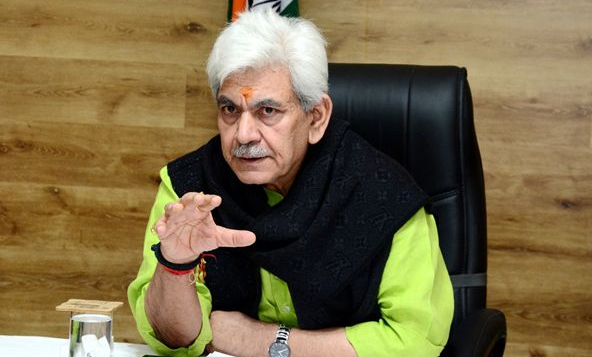 The LG has appreciated his suggestions proposed to government for promoting the interactions among people, police and policy makers and in return the resident expressed his gratitude to him for considering his suggestion for the same. Qureshi also praised the present dispensation for introducing the novel concept of Awaam ki Awaaz which provides a platform for a common citizen to vent out his concerns and suggestions for the welfare of the entire society. He said that it is due to the Awaam ki Awaaz initiative that any resident of the Union Territory is able to apprise the Lieutenant Governor of their grievances and suggestions and seek their redressal.

Referring to the suggestion made by Peer Ubaid Qureshi from Baramulla for promoting an integrated culture of 3P’s – People, Police, Policy-Makers in schools, the Lt Governor observed that such interactions are bound to inculcate a strong spirit of leadership in the next generation.

Qureshi, who is serving the government of Jammu and Kashmir, while emphasizing the need for promoting the interaction said that the policy makers should make concrete efforts to introduce the culture of counseling for students in schools and colleges. He said that school and college heads should hold counseling sessions regularly so that the energy of the youth is properly channelized towards building a better future for them. He also said that the issues and the challenges have to be acknowledged and discussed with the community.

He said that the continuous interaction among People, Police, Policy-Makers will build strong relationships of mutual trust which will have huge benefits for the entire community.( KINS)

Foreign tourists who arrived in Srinagar today being sent back tomorrow: DC Srinagar