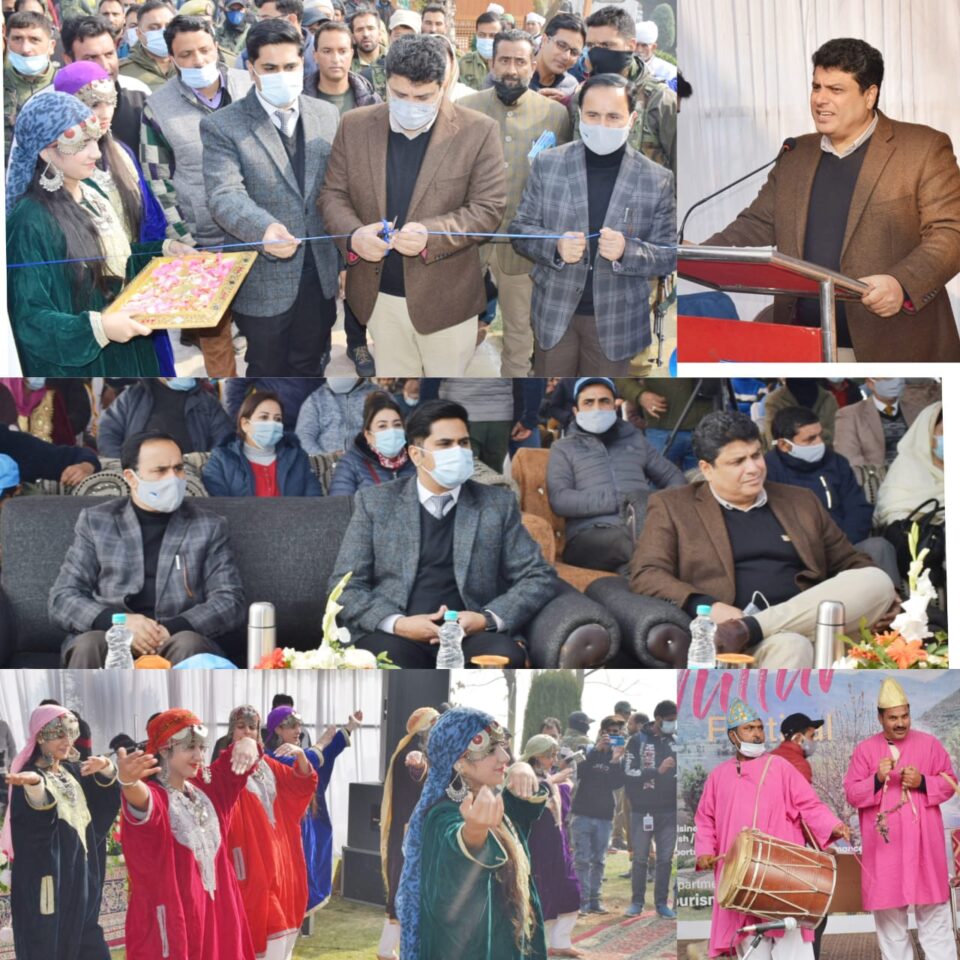 Saderkote(Bandipore), November 16,( KINS): The banks of famed Wullar lake here witnessed a day-long festivity of culture, music and art. The occasion was the celebration of the Wullar festival at Wullar Vantage Park as part of the Tourism Department’s initiative to promote 75 lesser known tourist destinations across Jammu & Kashmir.

Addressing the gathering on the occasion, Secretary, Tourism & Culture, Sarmad Hafeez said the festival is part of the initiative of the Tourism Department to bring the 75 lesser known tourist destinations across Jammu & Kashmir on the tourist map and ensure these receive a good footfall in the coming months. He said the festival here aims to bring tourism potential of Bandipora especially Wullar lake to the limelight. He said the Department earlier this year organized a three day festival at Gurez to promote the destination and subsequent arrivals to the place are an endorsement of the Department’s concept and efforts.
Terming Wullar lake as a complete tourist destination, the Tourism Secretary said the Department is making efforts to uplift the image of the lake befitting its reputation as one of the largest freshwater lakes in Asia and ensure significant flow of tourists here. He said the Department is planning to hold a bird watching festival soon to further take Wullar and adjoining areas on the tourist map.

This, Sarmad Hafeez said, would trigger a chain reaction of setting tourist infrastructure in the area sparking a brisk economic activity. He said the festival also provides an opportunity to the local population to get to know about the tourism potential their area has. He said the Tourism Department had invited tour and travel operators to the festival who will get to know about the beauty and potential of the place so that they can offer to the tourists.

Deputy Commissioner, Bandipora, Dr Owais Ahmad in his welcome address hoped that the festival will go a long way in promoting the tourism potential of the Bandipora district. He said efforts are being made to highlight the tourism potential in Bandipora district and various projects are in the pipeline that will give a boost to the tourism sector in the district. He invited the people to visit Bandipora to have a variety of attractions including Wullar, Gurez, Authwatto besides other scenic beauties and avenues for adventure tourism.

The Deputy Commissioner said Bandipore has many tourist spots like Tragbal, Sheerasar, Hapatnar, Tulail, Sirender, Athwatoo, Buthoo, and Krisilpati besides the shortest trekking route to mount Harmukh. He hoped that with the collective efforts of the district administration and Tourism Department these tourist destinations would soon be on the tourist map of Jammu & Kashmir.

Director Tourism Kashmir, Dr. GN Itoo said that the tourists in contemporary times do not want only sightseeing but a range of activities including adventure, sports etc. He said Wullar lake, in particular, has everything to offer for tourists of all types, be it site seeing, adventure tourism, Sports tourism or bird watching etc. He called for improving tourism infrastructure in un-exploited areas while taking care of its flora and fauna.

The day-long Festival witnessed the participation of a large number of people who got enthralled by the fascinating varied cultural programmes presented by famous singers, bands and solo performers besides other cultural groups. A painting competition was also organised during the day in which students from various schools participated.

Several Government Departments including the Department of Handicrafts, Handloom, NRLM, Fisheries, Forests, Agriculture, Horticulture, WUCMA and Tourism had installed stalls to showcase local products. The stalls attracted a large number of people who were also informed about the rich tourism potential of Wullar Lake. The dignitaries visited all the stalls and interacted with the resource persons attending the stalls.

An interaction with Young Wullar Mitras was also held on the occasion who act as guardians of the lake and work to sensitize the local population about the need to preserve the lake.

A special arrangement of Bird watching was also made by the Forest Department and WUCMA that attracted a large gathering of people.
DDC Chairperson Abdul Gani Bhat, Vice-Chairperson Kounsar Shafeeq, Superintendent of Police, Mohammad Zahid, senior officers of Tourism Department, representatives of various travel trade bodies, officers of district administration and other senior officers were present on the occasion.( KINS)

Safety and security of JK students studying outside the state reviewed