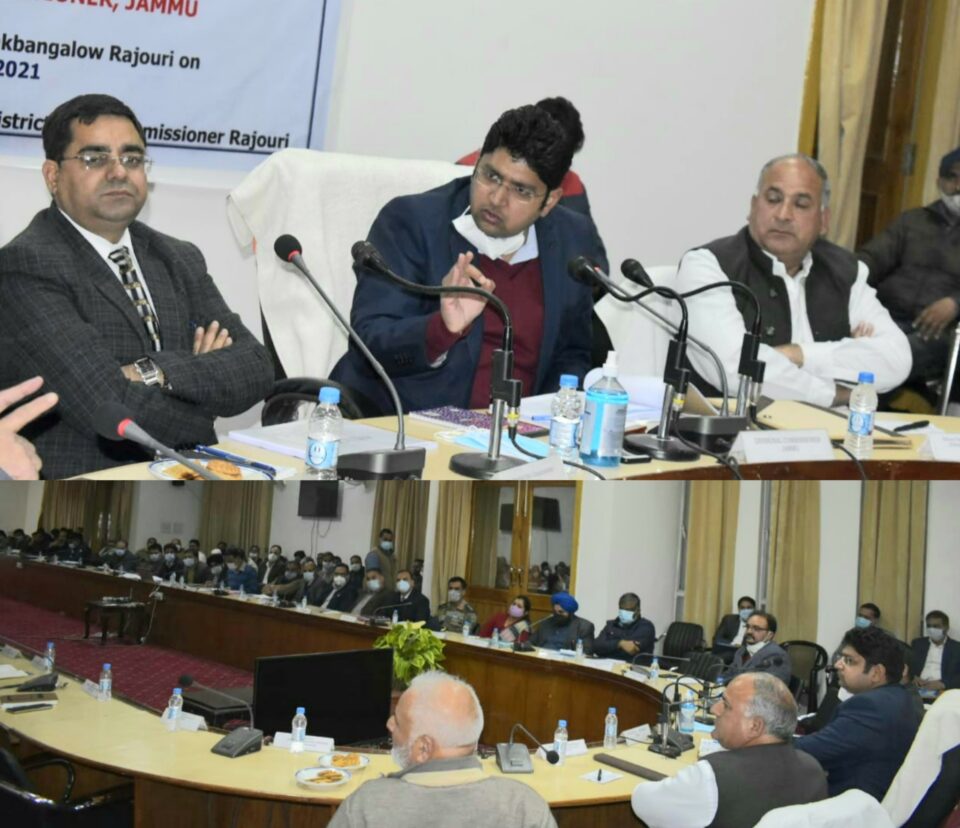 Directs Officers to cooperate with PRIs; asks for timeline completion of development projects

At the outset, the DDC gave a brief about the achievements and initiatives of the district Administration and progress achieved under various flagship schemes.

The Div Com gave a patient hearing to all the demands and issued on the spot instructions to the concerned departments for resolving these issues on priority. He also assured that rest of the issues would be considered for early redress.

Responding to the issue of release of payment of Border bunkers, he said two types of bunkers i.e. under MHA grants and Languishing projects and the payment for untendered works has been made by the government of which 25 per cent  funds have been released for disbursement. He also directed for immediate clearance of the payments and submission of UCs for seeking more funds. He further informed that the issue of languishing bunkers has been taken up with the government.

Tendering of works is being carried out as per GFR and for transparency, accountability of the works and time-bound execution of works.

Regarding the registration of contractors, the DDC informed that 2500 persons have been roped in and no file is pending.

The Div Com stressed on extending handholding to  rural youth for registering them as contractors. He instructed concerned departments to fix a day for the registration of contractors and resolve the issue.

Responding to the complaints of non-cooperation of the line Department with the PRIs, the Div Com directed the DC to take cognizance of the issue and ensure that proper protocol and cooperation is maintained with Panchayat institution representatives.

The Div Com also stressed on timeline execution of works and warned that no laxity in this regard will be tolerated.

The Chief Education Officer was asked to go for  rationalization of teachers to overcome the shortage of staff in the schools as reported by the PRIs.

The Vice-Chairman sought the intervention of the Div Com in re-implementation of transfer order of teachers kept in abeyance to overcome the problem of staff in the schools.

Inquiring about the Forest clearance status of proposed projects, the Div Com asked  for ensuring minimum disturbance to ecology during the execution of projects,  He asked for mapping of infrastructure in the Forest area and uploading the same on the Parivesh portal.

While reviewing progress under PMAY –G, the Div Com stressed on 100 percent completion of the houses in the district.

He directed DFO and DMO to facilitate the construction and completion of the houses under PMAY G by providing Timber and minor mineral supply, wherever required and permissible.

While reviewing MGNREGA works, he took serious note of slow expenditure and execution of works.

Regarding Jal Jeevan Mission, the meeting was informed that 292 schemes at an estimated cost of Rs 1500 crore have been approved for coverage of 380 villages and the project is in the tendering process.

Reviewing the status of B2V3 works, the Div Com pointed out that the completion rate is very low, and directed the RDD, PWD and JPDCL to expedite the pace of work.

Seeking details about the winter preparedness, the SE JPDCL informed that two workshops are functioning  in the district besides double circuit power and buffer stock has been made available.

The Div Com also inquired about the status of the Fruit Mandi Complex and was informed that out of total 66 shops 19 are functional.

The Div Com directed the officers to work in tandem to achieve the desired results within set timelines. He also asked Officers to maintain coordination and cooperation with the PRs, as they are the faces of the working of the Officers.

The Div Com also passed on spot instruction to officers for early redress of the public grievances and ensured a prompt service delivery system.

Later, the Divisional Commissioner held a meeting with the Municipal Committee members, representatives of Beopar Mandal and listened to their issue.The deputations put forth their demands and demanded  a Solid waste management plant for Rajouri, replacement of defunct water pipes, ware house for Rajouri, parking spaces, installation of CCTV cameras etc.The Div Com assured the deputations that all their genuine demands would be given due consideration.( KINS)

Body of minor retrieved after five days in Poonch