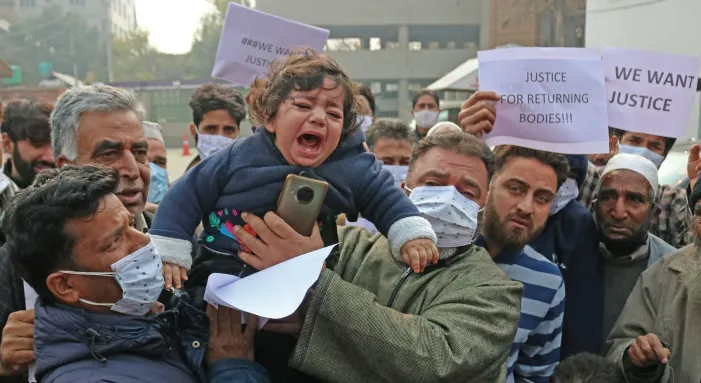 Srinagar Nov 18 (KINS): Families of slain, political parties, and others Thursday took to the streets seeking return of dead bodies of civilians who were killed in the Hyderpora encounter on Monday evening.

According to the police, a Pakistani militant and his local associate Mohammad Amir, along with two civilians Mohammad Altaf Bhat and Dr Mudassir Gul were killed in the encounter. Police claim that Dr Mudassir was working as an OGW. However, the families of local slain persons have rejected all these charges and said they were innocent and seeking their dead bodies.

The encounter has come under question with political parties, civil society groups and families of these slain people demanding an independent probe to unveil facts and seeking their dead bodies so they can perform their last rites and give a decent burial.

Police have buried all the four dead bodies including a Pakistani militant in North Kashmir’s Handwara district.

On Wednesday several political parties took to the streets seeking return of dead bodies of civilians to families. There is also anger against removing of bereaved families during the Thursday night from press colony who were on protest seeking their dead bodies.

PDP president Mehbooba Mufti, who was scheduled to hold a protest, was placed under house arrest on Thursday.

However, senior vice president and former chief minister Omar Abdullah along with party leaders led a sit-in at a local park in Sonawar. He according to news agency Kashmir Indepth News Service (KINS) demanded bodies of civilians killed in Hyderpora encounter should be exhumed in Handwara and handed over to their families for last rites.

“We are sitting here peacefully. If we wanted, we would have blocked roads, bridges, but no. There has been no sloganeering, no law and order disturbance and no road has been blocked. We are not raising voice against the government, we just demand that the bodies be returned,” he told reporters.

Omar said despite the police admitting that the civilian was killed in crossfire, his body was not given to the family, but buried in Handwara.

“We heard this morning that the families were called to PCR and we were hopeful that after Farooq Abdullah talked to LG, there will be some development in it, so we waited. We kept waiting in our office from 11 am thinking that something will be done, but they (families) were told to wait for two to three days,” he said.

The NC leader said he wanted Lieutenant Governor Manoj Sinha to assure the families that Justice will be done.

The People’s Conference led by Sajad Lone also took out a protest march here, demanding the return of bodies of the civilians killed in Hyderpora encounter and a judicial probe by a serving High Court judge into the incident.

Senior vice president of the party Abdul Gani Vakil along with dozens of workers joined the protest held near M A Road here.

Vakil said the Hyderpora encounter is “strife with doubts” when seen with perception of neutrality and “it is only after an impartial or neutral probe that the recent turn of events would be justly perceivable to every citizen of this country beyond a reasonable doubt”.

He said that those involved in the incident should be dealt with as per the law. “We believe those involved irrespective of their position are law violators and deserve punishment.”

“Ironically, burial is not being allowed citing several issues including Covid, security reasons and others, which is against the constitution. We had decided to meet the victim families under the leadership of Dr Farooq Abdullah and informed police about it, but were not allowed,” he said.

Humaira Gul, wife of Dr Mudassir Gul, a dentist, who was killed in the encounter, said her husband was innocent.

“Give us justice. My daughter is asking for her father ‘Baba’. Give justice to my three children. He was not a terrorist. If he was a terrorist, then show us evidence. We want his body so my children and I will get the last glimpse of his face,” Humaira, Gul’s wife said, while crying. “If they show us any evidence that he was a militant, kill me and my children,” she told news agency Kashmir Indepth News Service (KINS), while beating her face and chest. He had been father of three minor children.

She said on Monday morning, her husband left home. In the evening his phone was switched off and the family got to know later that he had been killed.

According to the police, Mohammad Altaf Bhat was killed in the cross-firing and it was not clear whether he was hit by the bullets fired by the militants or the security forces.

The police claimed that Bhat had rented out the first floor of the building to Dr Mudassir Gul, and he used the space for carrying out militant activities. However, the family has rejected the allegations.

Bhat, a father of three minor children, had been dealing in construction material over the last two decades. Among his children, the youngest is his seven years old son.

They family claim that he was used as a shield by the security forces.

Similarly, another local killed in 24-yer-old Aamir Magray from Ramban of Jammu region, which police claimed was a militant. The family however says he was working at a shop with Dr Gul in Kashmir. His father Abdul Latief Magray had killed a militant in 2005 with a stone. “I have killed a militant with a stone. My cousin was also killed by militants. But today I got the reward that my innocent son has been killed by security forces and branded a terrorist,” he said, while seeking his son’s body. (KINS)

CUK suspends classwork for Nowgam-I, Nowgam-III campuses from Nov 14 to 16

Vision of LG is to transform skill and technical education as per NEP-2020: Advisor Bhatnagar