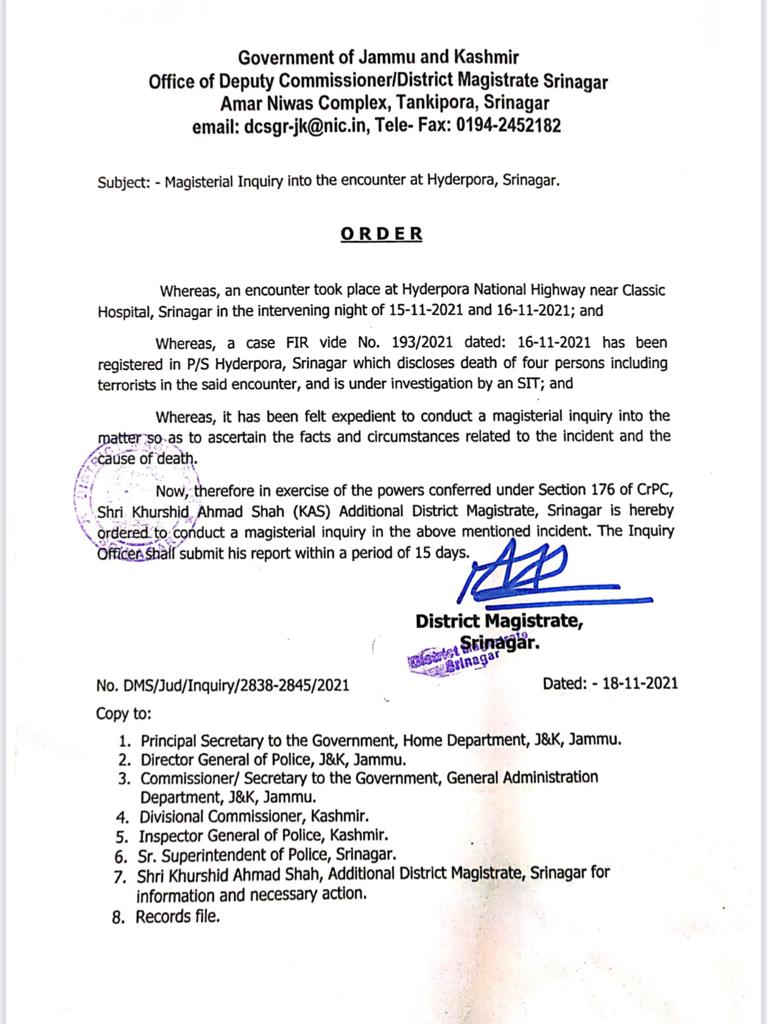 The Monday night “encounter” has come under dock after families of three killed in the incident contested the police claim saying they were innocent civilians.

According to the government the inquiry would be conducted by an additional district magistrate.

A magisterial inquiry by officer of ADM rank has been ordered in Hyderpora encounter, the office of Lieutenant Governor Manoj Sinha tweeted.

Govt will take suitable action as soon as report is submitted in a time-bound manner. J&K administration reiterates commitment of protecting lives of innocent civilians & it will ensure there is no injustice.

Four persons were killed in an alleged gunfight at Srinagar’s Hyderpora area. Jammu and Kashmir Police said out of the four slain two were militants, one Mudassir Gul was  terrorist associate” and another was the owner of the building where the action took place.

The families of three have contested the police claim.

The probe by the government has been ordered hours after the protesting family members were removed by police late Wednesday.

The two families of Altaf Ahmed Bhat and Mudassir Gul were staging a sit-in at the press enclave in Lal Chowk demanding the return of the bodies of their slain kin.

Police, however, already buried the mortal remains of those killed on Monday in frontier district of Kupwara to avoid law and order situation.

The protestors said the authorities snapped the power supply to the area and later forcibly removed them from the spot.

The videos of the police removing the protesters went viral on social media and evoked fresh outrage.

PDP president and former Chief Minister Mehbooba Mufti said: “Instead of handing over the remains of the innocent civilians, police arrested the family members for demanding the bodies of their loved ones. Unbelievably ruthless & insensitive. Least they can do is return the mortal remains immediately.”

The PDP spokesman said Mufti had to join protest last evening but police blocked the route and did not allow her to move towards protest site.

Another former Chief Minister Omar Abdullah said it is outrageous that the J&K administration did not allow the families to conduct a peaceful sit-in.

This is the naya Kashmir of 2021. This is how the J&K police fulfils  @PMOIndia promise to remove dil ki doori & Dilli se doori. It’s outrageous that the J&K administration did not allow the families to conduct a peaceful sit in protest, the NC leader tweeted.

I’ve rarely seen families who have been wronged, …conduct themselves with such dignity. They have been reasonable in their demands & dignified in their conduct. The result of this is visible for all to see as the police drags them away in the dead of night, he said, adding LG @manojsinha should reach out to these families, hear them in person & then give them the bodies of their loved ones. It’s the only right thing to do, it’s the only humane thing to do.

Peoples Conference Chairman Sajad Lone called the police action inhuman. What on earth has happened to the administration. Why can’t they present a human face. Why are they so intent on presenting a very inhuman and ugly face, Lone tweeted posting a video of the police action.

Srinagar Mayor Junaid Mattu said the truth shall prevail. “My heart goes out to the families out in sub-zero temperature seeking the still, lifeless dead bodies of their loved ones. The least the Administration can do is to return the mortal remains of the dead civilians to their families, Mattu tweeted.

A police officer said the protesters were not detained and were only removed from the spot.( KINS)

CB grills Ex-minister over illegal allotment of works in JKPCC