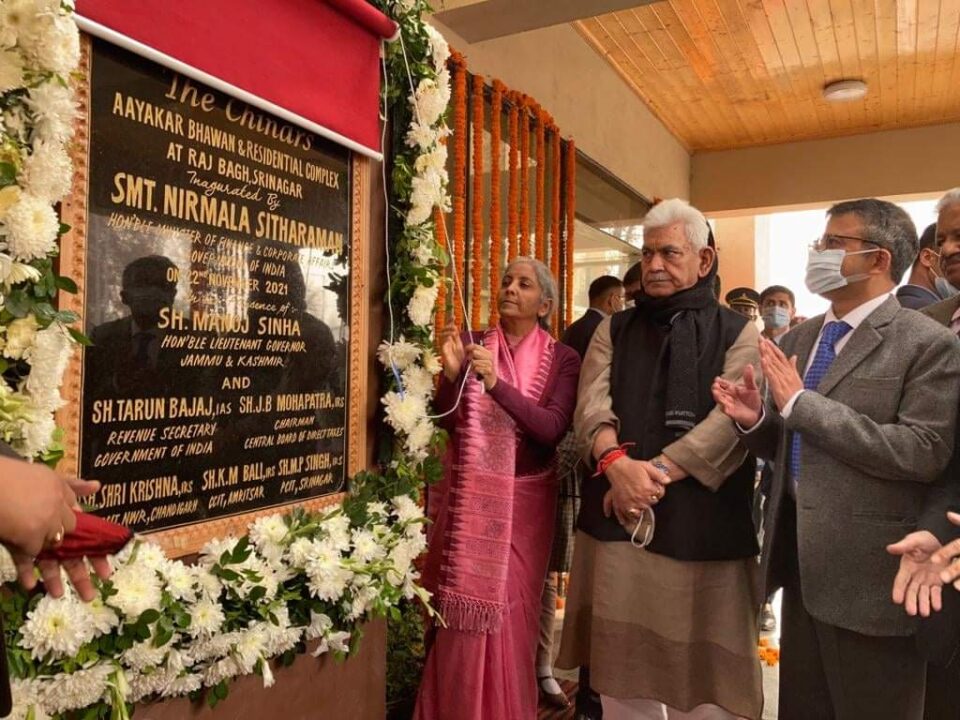 She was given the guard of honour and accorded ceremonial welcome upon her arrival at Rajbagh. The Income Tax office was relocated several times in Srinagar after it was damaged in a militant attack at Barbarshah in 2005.

The office got its permanent place after 14 years. Speaking on the occasion, the Finance Minister observed that the establishment of the office complex and the attached “Aaykar Seva Kendra” will help provide better service to taxpayers in a spirit of “Jan Bhagidari”.

Sitharaman thanked the people of Jammu and Kashmir for their contribution to the efforts in enabling the commissioning of “The Chinars”, the Aaykar Bhawan and other facilities. The inauguration of “The Chinar” assumes significance in light of the fact that it houses the newly created charge of Principal Commissioner of Income Tax in Srinagar, one of the largest civilian offices of the Government of India in the city.

In 2005 after the unfortunate incident where the IT building got damaged in a terrorist attack, today I am grateful to the people of Jammu and Kashmir who have enabled the commissioning of “The Chinar”, Aaykar Bhawan and other facilities, Sitharaman said.

The Finance Minister said that the occasion makes me feel happy and I thank the peace loving people of Jammu and Kashmir. Taxation is not only a collection of taxes but people’s participation in the spirit of Jan Bhagidari, she said. (KINS)

High alert sounded in Jammu after grenade attack in Pathankot

PM Modi: Along with ‘Make in India’, our mantra has to be ‘Make for World’

Governor expresses grief over loss of lives in accident at Darhal