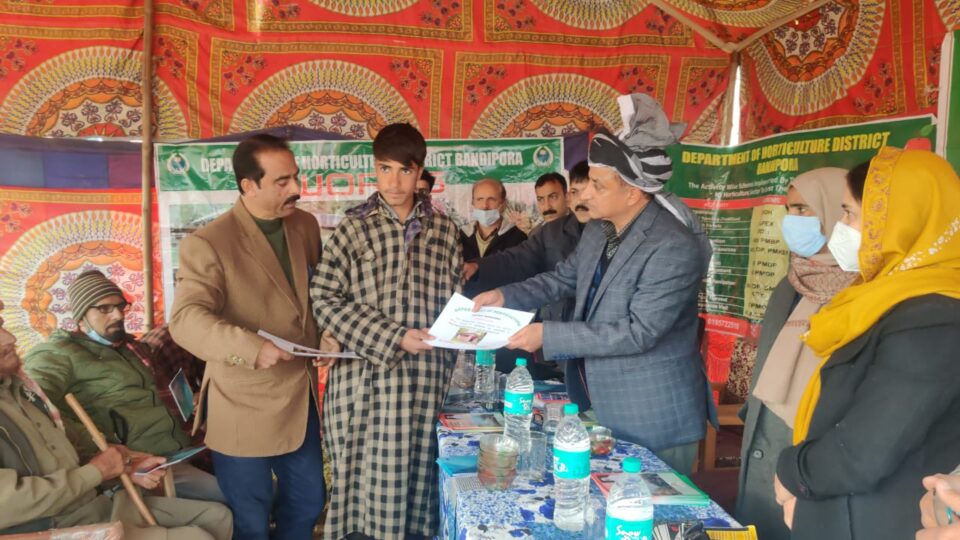 SRINAGAR, NOVEMBER 22 ( KINS): An awareness/training camp was today organized at Ketsun Benlipora (Aloosa) a remote tribal area of Bandipora by the Department of Horticulture.

This was the 3rd such camp organized by the Department to reach out to the tribal population.

Block Development Chairperson Aloosa along with other PRIs were present on the occasion, besides a large number of progressive orchardists, particularly those belonging to Tribal population, attended at the camp. Besides

The main purpose of the camp was to raise awareness among the tribal and far-flung population about the different departmental Schemes.

During the camp the representatives of line departments highlighted their achievements and appraised the participants about the different developmental schemes/initiatives taken by UT Government for the betterment of Tribal Community.

Addressing the gathering, the DG elaborated in detail about the incentives available under the various central and UT sponsored schemes of the department viz. MIDH, PMDP, SMAM, PMKSY, CAPEX etc., and urged the tribal farmers to come forward and avail the benefits under these schemes.

On spot instructions were given to the Chief Horticulture Officer to give due share in all the developmental schemes to tribal farmers particularly Veri-Compost Units, Bore wells etc. He further directed him to issue at least one custom hiring unit in the area under relevant scheme.

He was accompanied by Deputy Director Horticulture Kashmir, Chief Horticulture Officer, Bandipora and other Officers of the Department.( KINS)

Arrangements on for smooth return of stranded persons to J&K: Nodal Officer

B.K.Singh visits many schools of Srinagar, interacts with students, teachers