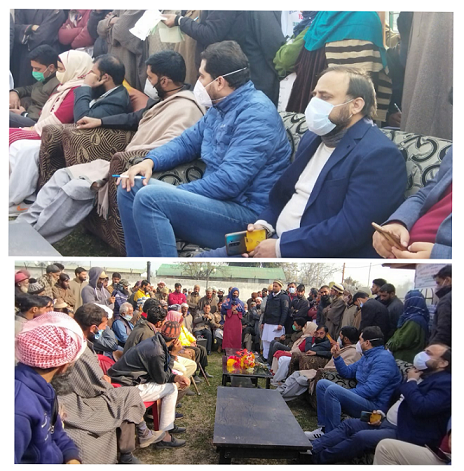 A cultural programme to remember the contribution of important tribal leaders was held at the occasion.

Speaking at the function, the DDC Chairman appreciated the initiative taken by the government to honor the contribution of tribals in the development of the country. He said that such programs also spread awareness among tribals about various public welfare measures of the government.

DC Anantnag, Dr Piyush Singla said that the district administration has ensured that special emphasis is accorded to the development of tribal and forest dwelling people in the district. In this regard, senior officials from the district have been visiting far flung areas twice a week to listen to grievances at people’s doorsteps.

He further said that Tribals have made a very significant contribution towards development since independence, and events like Jan Jatiya Gaurav Saptah are not only aimed at paying glowing tributes to the leaders for their contribution but also to familiarize our future generations with their contribution.

ACP Anantnag said that the District Administration has through the medium of these celebrations communicated various public welfare programs that tribals can benefit from. He said that special focus was laid on familiarizing the people with rights accorded to them under the landmark Forest Rights Act.

Accordingly, four mega functions were held in Anantnag, Pahalgam, Chittergul and Kokernag. The celebrations were organized with much fervour and saw huge participation of tribals as well as other people.

Senior officials and PRIs attended the celebrations at all venues. BDC Chairpersons, Sarpanches and Panches were also present and spoke about the issues confronting the ST community and sought their immediate redressal.

Cultural performances, speeches on significant contributions made by tribal people in the freedom struggle and development of the country, welfare measures for the people, particularly tribals and public hearings for redressal of grievances were organized during the week.( KINS)

Strong & confident New India is well-equipped to give a befitting reply to anyone who casts an evil eye, says Raksha Mantri during ‘Kargil Vijay Diwas’ event in Jammu