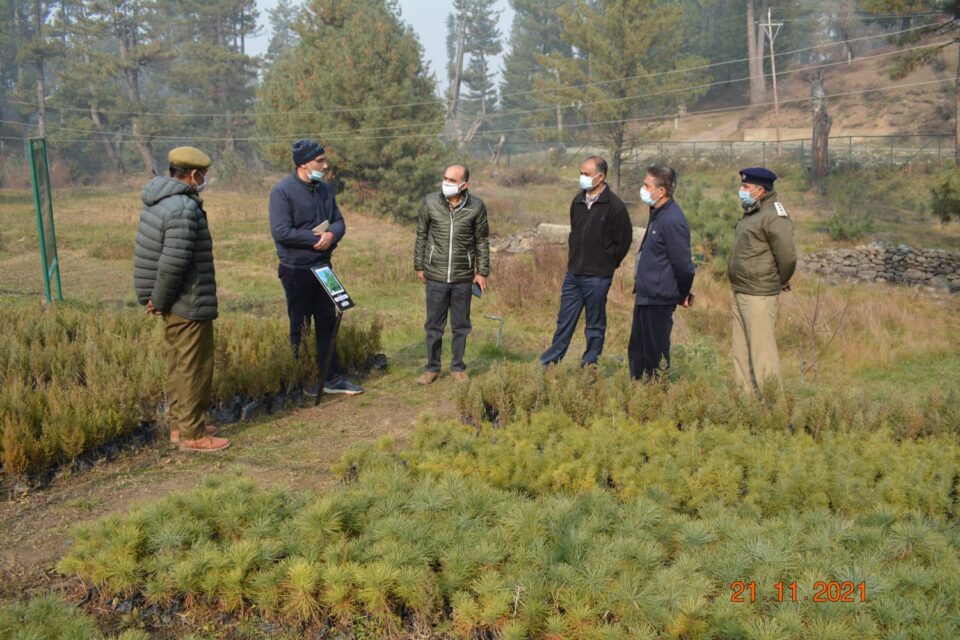 During the tour, the CAMPA works of Demarcation, Agrostology and afforestation of last year and ongoing works of 2021-22 were inspected in the field.

The PCCF interacted with the field staff and encouraged them for improvement in plantation and other works and overall protection of the forests.

He was apprised of the benefits of afforestation in the form of fodder, minor forest products to locals from the plantation closures.

The PCCF also visited the nurseries of the divisions and gave specific instructions for enhancing the capacity and introduction of environment friendly root trainer raisings on scientific lines. He also.

The tour concluded with an elaborate meeting with all DFOs of Kashmir Region in presence of APCCF Kashmir and Conservators of Forests wherein ongoing works were reviewed and directions were issued on preparation of plans for next year.

PCCF called for execution of directions of the Government to expand scope of “One Beat Guard One Village Programme” to all the villages and accomplish the target of planting of 130 Lac saplings which also marks the completion of 130 years of creation of the Department.

He also impressed people centric planning where the involvement of Village Panchayats and other grass roots level institutions is assured and departments also take due care of their requirements for fodder, firewood and other forest produce besides provisioning of water in dry areas.0

He directed the DFOs to pay utmost attention to meeting the afforestation targets, preparation of CAMPA APOs besides other forest protection and management works.( KINS)

National Lok Adalat to be held at Anantnag on December 11