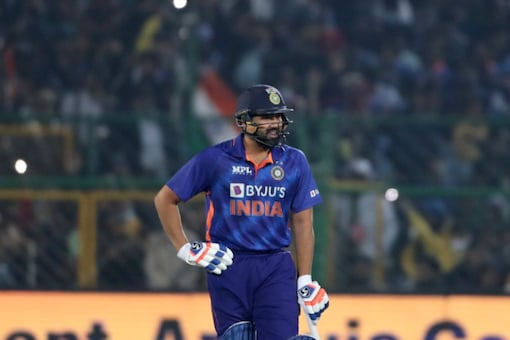 As captain of the Twenty20 internationals Rohit Sharma continues to sustain positive numbers. Not naive by any stretch of imagination — to showcase his leadership qualities — the seasoned campaigner in white-ball formats, and one who is making up a lot to prove his mettle in red-ball Test match cricket, has stamped his authority as captain and batter in three breezy Twenty20 internationals against New Zealand
Sharma got an opportunity to think on his feet in the past week and notch three more wins to take the winning percentage over 80 in 22 matches. All the three wins were decisive and he himself contributed aplenty with his bat to be declared the player of the series.

As a consequence of the 3-0 outcome against New Zealand, Sharma should be the obvious choice for the four-match Twenty20 series to be played against South Africa in South Africa in January 2022. The question that’s uppermost now in the minds of the discerning is whether the Twenty20 captaincy would be extended to ODIs and how this would be achieved taking Virat Kohli into confidence.

Sharma has staked a strong claim after the hands-down victory against New Zealand — led by Tim Southee and Mitchell Santner — and the BCCI may be compelled to look at Sharma as the white-ball captain for a term leading to the 2023 World Cup. Such an eventuality will also make things easier for the Head Coach Rahul Dravid and the support staff in the matter of communicating on various aspects of the game with two captains – Kohli and Sharma.

With India set to play two Tests against New Zealand at Kanpur (with Ajinkya Rahane as captain) and Mumbai (With Kohli as captain) and the three-Test series against South Africa in Johannesburg, Centurion and Cape Town) the suspense as to how the white-ball cricket captaincy will be dealt with will be known.

It was more or less certain that one of the stylish and successful batters in modern-day cricket, Sharma would be asked to take over the mantle of captaincy from Virat Kohli. Soon after the Test series in England, Kohli in order to focus on his batting, conveyed to the cricket world through his Twitter account that he doesn’t want to be weighed down by captaincy cares anymore, and he would quit from the post at the conclusion of the ICC Men’s World Twenty20.

As expected the BCCI’s senior national committee chaired by Chetan Sharma appointed Sharma as the captain for the three-match series. The short series has been done and dusted with New Zealand outplayed in all three matches. The Indian team has moved on after being shown the door by Pakistan and New Zealand, which actually lost to a vastly superior Australia in the Twenty20 World Cup final in Dubai on November 14.

Within three days India took on New Zealand without Kane Williamson, but India also fielded a team without Kohli, Jasprit Bumrah, Mohammed Shami, Ravindra Jadeja and also Hardik Pandya, who were part of the campaign in the United Arab Emirates.

Clearly there has been behind the scenes’ activity to bring about certain changes in the makeup of the Indian team and around it. The selectors, without doubt, demonstrated their dissent at the way off-spinner Ravichandran Ashwin being overlooked in the last four years after the ICC Champions Trophy of 2017, while the career of Jadeja was revived.

Can’t help if people make big deal out of one loss: Kohli

Kohli indicates ‘mini transition’ of pace unit in near future