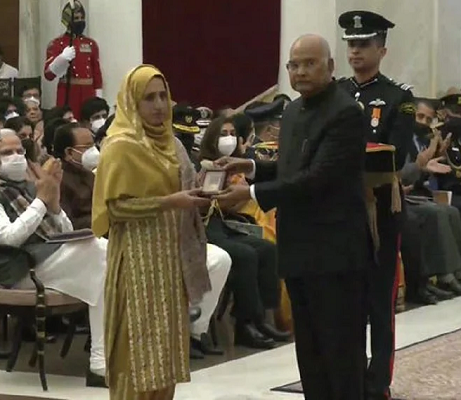 New Delhi  November 22 (KINS): Jammu and Kashmir Special Police Officer (SPO) Ashiq Hussain Malik conferred with Shaurya Chakra posthumously for showing the highest degree of courage leading to the elimination of 4 heavily armed militants  during an operation in Anantnag in 2018.

President Ram Nath Kovind, who is the Supreme Commander of the Armed Forces, conferred two Kirti Chakras, including one posthumous, one Vir Chakra and 10 Shaurya Chakras, including two posthumous, to the personnel of Armed Forces and Paramilitary Forces during Defence Investiture Ceremony (Phase-1) at Rashtrapati Bhawan, New Delhi in the morning of November 22, 2021.

The Gallantry awards were given to the personnel for displaying conspicuous gallantry, indomitable courage and extreme devotion to duty.

Chaos at Srinagar Airport: Travelers stuck for 7 hours due to traffic jam, mismanagement

One dead, six injured in gas cylinder blast in Budgam

“Together we can bring changes”, Mebooba tweets