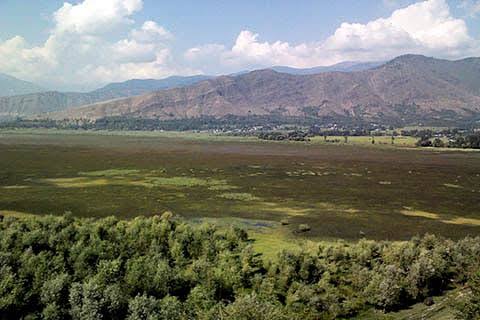 Officials asked to remove encroachments from Wular by Nov 30

Srinagar Nov 23 (KINS): Administration in Kashmir is concerned over the encroachments on water bodies which led to reduction in water carrying capacity.

An official told news agency Kashmir Indepth News Service (KINS) that the administration has expressed concern over encroachments on water bodies in Kashmir.

“Several water bodies including Jehlum, Wular and Dal Lake have lost their carrying capacity owing to a slight downpour posing a threat of floods in Kashmir,” the official said.

Wular, which is the largest lake of the valley and a flood basin, has witnessed massive encroachment for the last many decades. From paddy plantation to willow and now constructions, the lake’s areas had reduced to nearly 130 sq km.

The massive encroachment has its adverse impact on the health of the lake including decline in the fish population and quality of the water.

A senior official of the Irrigation and Flood Control Department said the Wular Lake which is the largest flood absorption basin has lost the water carrying capacity due to a host of factors.  “Several surveys have found gross human interference, deforestation, encroachments, choking of waterways and reduction in capacity of wet lands due to heavy siltation posing an imminent threat of floods even by average downpour,” the official said.

Taking note, Divisional Commissioner Kashmir has directed the Deputy Commissioner Baramulla and Wular Conservation and Management Authority (WUCMA) to remove the encroachments before November 30. “It is directed that encroachment shall be removed by or before 30-11-2021,” the order said.

The administration has also asked the WUCMA to prepare a comprehensive action plan on restoration of Wular lake.

“WUCMA shall prepare a comprehensive action plan about the Wular lake and shall submit the same before the committee constituted by the government for the purpose of the same can be incorporated into the submission before National Green Tribunal,” the Divisional Commissioner has said.

As many as 380 kanals and 11 marlas of land have been encroached over the years from the lake.

Earlier, the National Green Tribunal (NGT) took a strong note on the condition of the lake, particularly unscientific dumping of waste and encroachment around Wular Lake and has sought action plan from the Union Territory government for each of the wetland within one month for further action in a time bound manner.

“The matter of Kamas be taken with Rakhs and Farms so that action regarding the cultivation shall be taken as per NGT directions within 15 days,” Divisional Commissioner ordered the DCs. (KINS).

Multiple funerals offered to 6 militants amid shutdown in Shopian, Pulwama

Experts say Uttrakhand like tragedy could occur in J&K