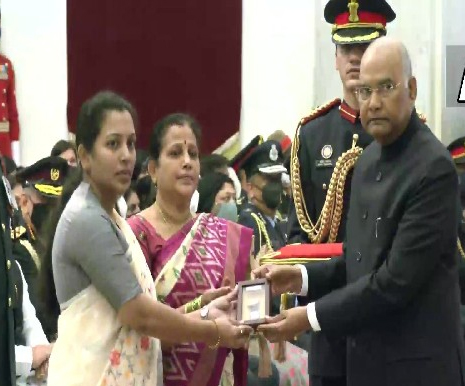 New Delhi, November 23 : Galwan valley clash hero Colonel Santosh Babu was awarded the second-highest wartime gallantry medal – the Mahavir Chakra (posthumously) by President Ram Nath Kovind in an investiture ceremony on Tuesday. Late Colonel’s mother and wife received the award from the President. Santosh Babu was awarded the gallantry medal for resisting the Chinese Army attack while establishing an observation post in the face of the enemy in the Galwan valley in the Ladakh sector during Operation Snow Leopard. India lost 20 troops in the fiercest clash between the two sides in a long time. The Chinese also suffered significant casualties. The clash led to the hardening of India’s stand, which has now allowed troops to use weapons during patrolling after the use of unorthodox weapons by Chinese troops. (Agencies)