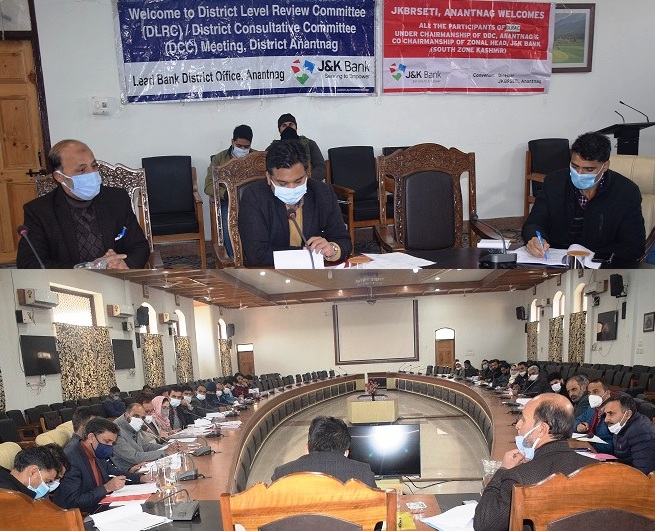 DC chairs DLRC; says Credit facilitation to be taken up on priority

The credit plan for the district was also reviewed at length on the occasion.

At the outset, Dr Singla announced that the block level task force setup by the District Administration had successfully identified 2000 unemployed youth after much deliberation. While the task forces received thousands of proposals for setting up self-employment initiatives, after thorough discussion, 2000 such proposals had been shortlisted.

He informed that the exercise was carried out under the ambit of Be-Rozgar Se Swarozgar initiative of the Govt. of UT of Jammu and Kashmir. He directed all the banks to ensure that the cases are vetted on a war footing basis and credit disbursed to the sanctioned cases without any delay.

Speaking on the occasion, Director RSETI, Anantnag informed the chair that 53 candidates have been trained by RSETI in the preceding months and of these, 28 have already established business units. With regard to financial literacy and credit counseling centers, since August, 3 permanent centers have been established in Sagam, Chittergul and Srigufwara and will spread financial awareness in the adjoining areas.

Dr Singla emphasized that the banks have to ensure lending particularly to beneficiaries of self employment schemes and banks must sensitize their branch functionaries about minimum requirements and hassle free flow of credit.

Further there were thorough deliberations on sponsored cases and disbursed cases. The DC reviewed the reasons for any difference between sponsored and sanctioned cases and passed strict directions to bank officials to increase vigil on subsidiary branches and ensure there is no denial of service on flimsy grounds.

The DC also fixed timelines for banks to complete target lending. He said that the lending by banks is one of the primary drivers of investment in the economy and as such lending, particularly towards self employment schemes, must be completed within fixed timelines

Reviewing lending to the agricultural sector, DC directed officials from the Agriculture department to organize a bank meet of farmers with bank officials and thorough discussion to create innovative products that cater to their needs.