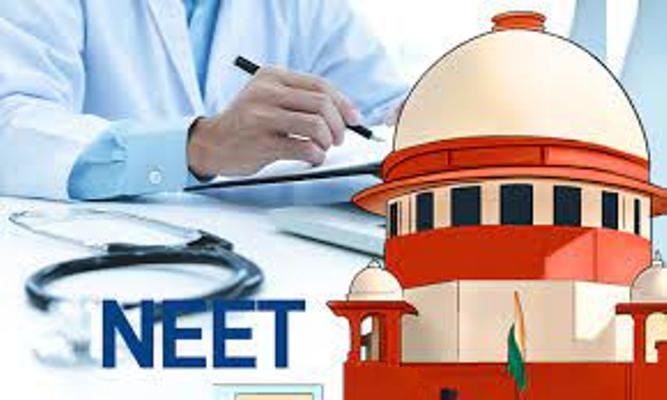 New Delhi , Nov 25 ( KINS): The Centre on Thursday told the Supreme Court that it has taken a considered decision to revisit the limit of rupees eight lakh annual income fixed for determining the Economically Weaker Sections (EWS) category for reservation in NEET admissions for Post-Graduate medical courses.

A bench of Justices DY Chandrachud, Surya Kant, and Vikram Nath was informed by Solicitor General Tushar Mehta that a committee will be constituted to determine the criteria for EWS and it would take four weeks.

Mehta said that the NEET (PG) counselling would stand postponed for a further four weeks as per assurance earlier given to the court. (KINS)

Build-up to abrogation of Article 35A begins, does it go before Aug 15?

Will work on using science for promoting ease of living: Dr Jitendra Singh

The Karvan-e-Aman bus, operating between Srinagar and Muzaffarabad, capital of Pakistan-administered-Kashmir (PaK), on Monday remained suspended since March 24, official sources said. The cross-Line of Control (LoC) trade also remained suspended since March 24. The weekly cross-Line of Control (LoC) bus, introduced as one of the major Confidence Building Measure (CBM) by Pakistan and India in 2005, remained suspended since March 4. Initially it was reported that Aman Setu peace bridge was under repair from PaK side at Kaman post, the last Indian military post on this side of the LoC. Now it is being said that strained relations between India and Pakistan after 44 CRPF personnel were killed in a fidayeen attack by Jaish-e-Mohammad (JeM) at Awantipora on Srinagar-Jammu national highway on February this year. The bus has helped thousands of families, divided since 1947 due to partition to meet each other. It was also decided to allow residents from both sides to travel on “Travel Permits” instead of International passports. However, travel permit is being issued only after the intelligence agencies from both the countries clear their names. Despite opposition by militants, almost all separatist leaders, barring hardline Hurriyat Conference (HC) chairman Syed Ali Shah Geelani and Democratic Freedom Party (DFP) chief Shabir Ahmad Shah, travelled in the bus to PaK. Cross-LoC trade also remained suspended since March 4. However, later trade was also officially suspended by the Ministry of Home Affairs (MHA) after intelligence reports that trade was being used by anti-national elements for violence in Jammu and Kashmir.(UNI)