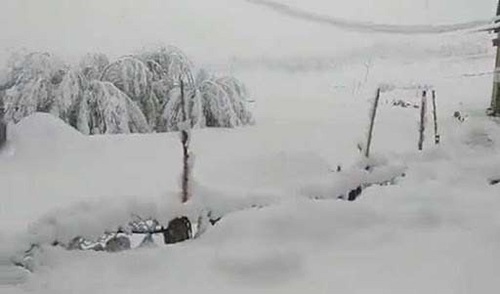 Srinagar, Nov 25  ( KINS): The night temperature at most places in Kashmir stayed above the freezing point on Thursday as the residents in the valley experienced slight relief from cold conditions which had set in earlier than usual this year, officials said.

Pahalgam and Gulmarg were the only two places in the valley which experienced sub-zero night temperature on Wednesday night, the officials said.

The mercury in Kupwara in north Kashmir settled at a low of 0.1 degrees Celsius.

The officials said Pahalgam, which serves as the base camp for the annual Amarnath yatra, recorded a low of minus 0.2 degrees Celsius.

Gulmarg resort in north Kashmir’s Baramulla district recorded a minimum temperature of minus 1.2 degrees Celsius. The resort was the coldest recorded place in Kashmir.

The MET Office has said the weather will most likely remain dry but cold till the end of this month.

However, there is possibility of light snowfall over the extreme north Kashmir parts on Thursday, it said.

Kashmir valley experienced an unusually cold weather this season as the minimum temperature dropped several degrees below the normal.

The wintry conditions in the valley set-in much ahead of the beginning of extreme harsh weather conditions which usually start around the third week of December.

‘Chillai Kalan’, the 40-day period of harsh winter in Kashmir, begins on December 21 every year. (KINS)

BJP to form next govt. in J&K: Ravinder Raina