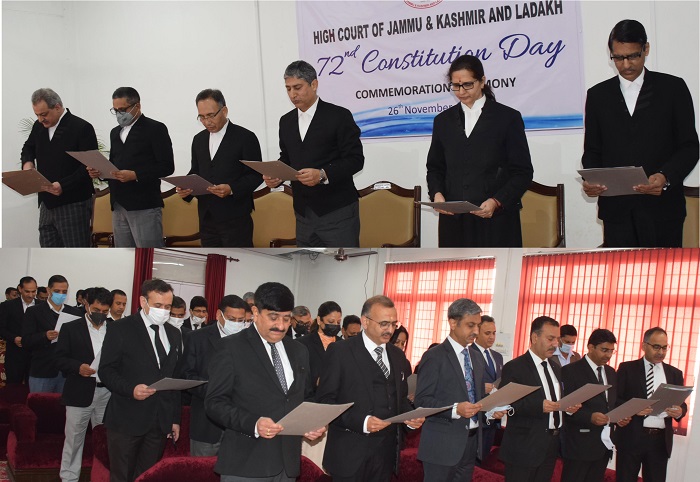 JAMMU, NOVEMBER 26 ( KINS): The 72nd Constitution Day was celebrated today in the High Courts of Jammu and Kashmir and Ladakh besides in all District Courts of both the UTs.

In Jammu wing of the High Court, the Constitution Day celebration was organized where Justice Dhiraj Singh Thakur led reading of preamble to the Constitution. Justice Tashi Rabstan, Justice Sindhu Sharma, Justice Rajnesh Oswal, Justice Puneet Gupta and Justice Mohammad Akram Chowdhary joined the preamble reading while Registrar General and other officers and officials of Registry of main wing and Jammu wing participated in the proceedings.

Similarly, the Day was observed in all district headquarters of the UTs of Jammu & Kashmir and Ladakh, where Principal District Judges led the reading of preamble to the Constitution.

Pertinently, by reading preamble to the Constitution, we reaffirm and reassure our resolve and commitment to hold its ideology.( KINS)