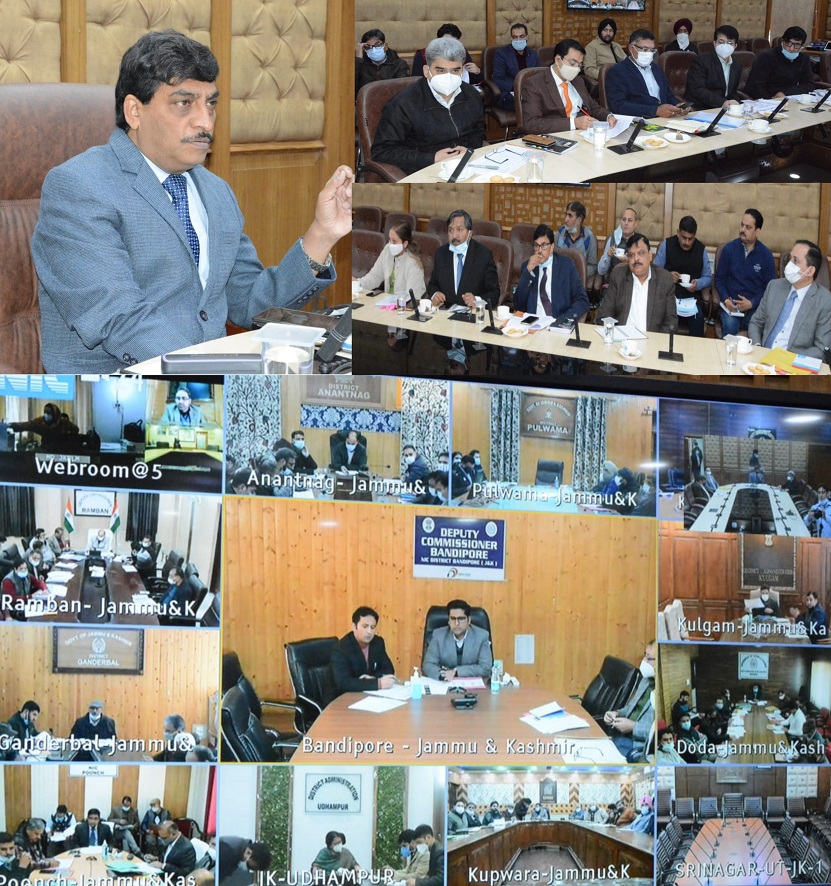 Giving details of 10 point campaign recently launched in UT, DDCs informed that all the 10 campaigns are being implemented in real earnest.

DDCs informed that youth clubs and PRIs are being involved in the implementation of Aapki Zameen Aap Ki Nigrani. Various camps have been held in districts, blocks, sub-divisions and tehsils to create awareness about the Scheme amongst the people.

It was informed that the Scheme has been widely appreciated by the people and the number of the people who are visiting the portal to access their records is increasing by the day.

Some DDCs stated that arrangements have been made during Block Diwas celebrations to facilitate access of land record to the people.

The Chief Secretary advised the DDCs to run campaigns to create awareness about the scheme so that target of facilitating access of land records to 10 lakh people is achieved.

Stating that around 2 lakh people have already accessed the portal to see their land records, Dr Mehta advised the DDCs to put in place a system of rectification of land records in case people file complaints regarding discrepancy in their land records.

While informing that Janta Ki scheme Janta Ki Baghdari campaign has not found much traction as yet, all DDCs stated that a series of campaigns are being launched at district, block, tehsil and block levels to create more awareness about the scheme.

The DDCs informed that the campaign will be converged with the Block Diwas celebrations for wider coverage besides involving youth clubs and Anganwadi and Asha workers, BLOs and Patwaris in reaching out to wider mass of the people for dissemination of the essence of the campaign.

The Chief Secretary advised the DDCs to educate people about the purpose of the campaign, especially the way they can not only know about the works being carried out in their areas, but also monitor them.

“This scheme has a great potential to actually empower the local people. If they start monitoring the execution of projects in their areas, it will have salutary effect on the project execution and deter irresponsible behaviour,” he added.

DDC, Srinagar informed that 12 events to spread awareness about employment generating schemes have been held in the district and 105 youth have been identified in 21 panachayats.

DDC, Bandipora informed that open camps have been organised and 15 youth per Panchayat have been identified and a database prepared which will then be shared with Mission Youth.

DDC, Udhampur stated that 4189 youth have been identified and they will be trained in different training institutes like ITIs, polytechnic, RSETIs etc. in the district. It was informed that 797 youth have already been trained and now bank linkage will be facilitated for them so that they could set up their ventures.

DDC, Samba informed that 280 youth have been identified and they are being provided counselling to enable them to choose the trade in which they can successfully set up their ventures.

The Chief Secretary advised the DDCs to redouble their efforts so that the unemployment rate in the UT is reduced to 5 %.  Dr Mehta advised the DDCs against limiting themselves to 5 youth per panchayat target and instead urged them to make out all efforts to create self employment opportunities for all the unemployed youth in their districts.

DDCs informed that as a part of Har Ghar Dastak campaign, all households in their districts are being reached to ensure that those who have remained unvaccinated so far are vaccinated.

DDC, Rajouri informed that lokmitras are being involved in reaching out to the households while DDC, Reasi stated that BLOs, ASHA/Anganwadi workers are being roped in to implement the campaign.

The Chief Secretary advised the DDCs to gear up their machinery to visit each household and ensure that no one remains without vaccination.

Dr Mehta asked the Health department to prepare the necessary protocols including designing a format and circulate the same to the DDCs so that the implementation of campaign is properly monitored.

The Chief Secretary advised the DDCs to ensure community participation in Swacchta campaigns as waste management is a cultural issue, which requires attitudinal change for better outcomes and community involvement.

DDCs informed that under Yogayata se Rozgar campaign, new appointees are being felicitated to send a message to the wider public that employment in the UT shall now be available on merit only.

Dr Mehta advised DDCs to educate the people about the institutional changes brought about in the selection processes in UT which will ensure that all future recruitments will now be made on merit and in the most transparent manner.

While reviewing the capex budget, Additional Chief Secretary, Finance informed that expenditure incurred by all the districts under the UT component is low.

He stated that since under existing norms, only 30 % expenditure can be made in the last three months of the fiscal year, including only 15 % in the last month, DDCs will have to speed up works while ensuring that they conform to financial norms.

While expressing concern at low level of expenditures, the Chief Secretary asked the DDCs to speed up execution of works and make milestone based payments as per terms of contracts where appropriate so that works are speeded up

Dr Mehta advised the DDCs to ensure that allotment of contract in respect of tendered works is atleast 90 % by 15th December, 2021.

Taking note of poor expenditure levels in various schemes under district Capex, the Chief Secretary advised Finance Department to review the implementation of schemes in district capex individually with DDCs.

Dr Mehta asked DDCs to hold block diwas properly, besides ensuring that they connect with the people through a dedicated window for public hearing on the days already identified for the purpose.

CFV in Poonch, Rajouri districts, no loss of life, property