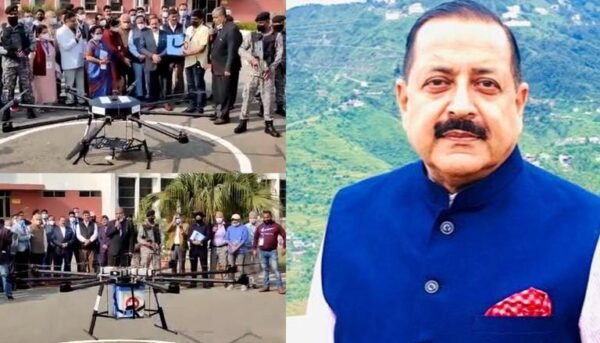 Jammu ,Nov 27 ( KINS) Union Minister Dr Jitendra Singh on Saturday launched a drone-based vaccine/emergency medicine delivery system close to the international border in Jammu. Dr Jitendra Singh took to his Twitter handle and shared the video of the event in which he can be seen launching the drone-based medicine delivery system. The video shows that a man loads a medicine kit bag under the drone and then operates it through a remote. The drone then flies away in the sky carrying the medicine kit bag while Dr Jitendra Singh and other spectators watch its successful launch. Sharing the video, the Union Minister further informed that this CSIR initiative comes under the Ministry of Science & Technology, contributing to the #HarGharDastak campaign.

Furthermore, Jitendra Singh during the event stated that this drone is developed by the National Aerospace Laboratory. The Union Minister also stated that Ispace laboratory. The transport in hilly areas is challenging. In such situation, this drone can be used. Secondly, this plan has started in border areas. The border area receives weapons from Pakistan. Pakistan drones bring weapons to do militancy, our drone will transport medicine, to prevent human lives as ambassadors of humanity. This message will go to the world,” said Dr Jitendra Singh.

As per PIB, CSIR-NAL has teamed with the Department of Health & Family Welfare. The Octacopter has successfully delivered 50 vials of Covid-19 vaccines along with syringes in a special container from Chandapura PHC to Haragadde PHC on 13th November 2021.

In October, ICMR had launched i-Drone to overcome challenges by deploying Unmanned Aerial vehicles (UAV)/ drones to remote areas and hard to reach terrains. While permission has been granted for the i-Drone implementation in Manipur, Nagaland and Union Territory of Andaman and Nicobar Island, the Ministry of Civil Aviation (MoCA), Directorate General of Civil Aviation (DGCA) and other central regulatory authorities had also granted permission to fly the said drones beyond the Visual Line of Sight.( KINS)

Over 250 shanties gutted in massive fire in Jammu