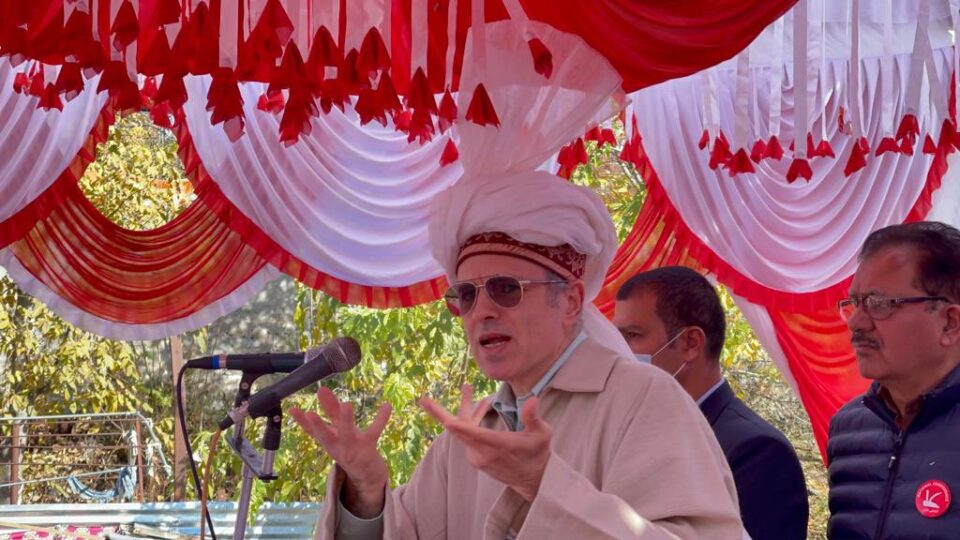 JAMMU, Nov 29 ( KINS): Slamming the Congress for its silence, National Conference vice president Omar Abdullah on Monday said his party will single-handedly continue its fight for the restoration of Article 370, if the grand old party is not ready to fight this battle.

J&K’s future is linked to the special status guaranteed by the Constitution, he said, adding that the case for restoration of Article 370 is very strong.

The former chief minister accused the BJP of “murdering democracy” in the Union Territory, after abrogation of Article 370 on August 5, 2019, by rendering institutions, including newspapers, feeble and said it has rendered “hollow” India’s slogan of being the biggest democracy in the world.

“Our case (for restoration of Article 370 before the Supreme Court) is very strong… We expected support from opposition parties but they are silent. Our existence is linked to this article,” said Abdullah, who is currently on a tour of the Chenab valley region, while addressing a public meeting at Kishtwar town.

Earlier, Abdullah, along with other senior party leaders, including general secretary Ali Mohammad Sagar, paid obeisance at the famous shrines of Hazrat Shah Farid-ud-Din Bagdadi and Hazrat Shah Asrar-ud-Din Wali and prayed for lasting peace and prosperity in Jammu and Kashmir.

Referring to the reported remarks of senior Congress leader Ghulam Nabi Azad that it is meaningless to speak about Article 370, Abdullah said, “I’m disappointed by his statement as he is a senior leader and former chief minister of Jammu and Kashmir.”

“If Article 370 is our heritage, it is also your party’s legacy more than ours. It was first prime minister Pandit Jawahar Lal Nehru of the Congress who brought Article 370 and today Congressmen are not willing to safeguard their legacy. So, how can one expect it to save the people,” he said.

The NC leader said the Congressmen have taken a decision before the court which is yet to start hearing the petitions filed before it against the abrogation of Article 370.

“If they are not ready to fight this battle, no issue, we will single-handedly take it to its logical conclusion. We will fight because this fight is linked to the future of the people of J&K, its jobs and land which is the first priority of the locals,” he said, adding that their fight is based on justice and for restoration of the honour and dignity which was snatched from them unconstitutionally.

The former chief minister said he is not comfortable with the word Union Territory and alleged that the people were told lies and misled by false promises and slogans when the erstwhile state was downgraded.

“We were told that Article 370 was an obstacle for industrialisation, generation of employment opportunities for our youth and the main reason for poverty, and its removal would pave the way for development and new projects… It stands exposed today,” he said and questioned the claims that Article 370 was hollow, asking “then what was the need for its abrogation”.

Accusing the BJP of murdering democracy in Jammu and Kashmir on a “daily basis”, he said media persons are being pressurised and are not allowed to write truth in the valley. “”If they write something, they are called to police stations and booked immediately. If the government gets angry, they stop advertisements in newspapers.”

He said newspapers are even being forced to remove old articles from archives so that a “new history” is written.

Likewise, democratic institutions are being violated, Abdullah said, referring to the no confidence motion moved against a chairperson of the district development council in Budgam district of central Kashmir. He claimed that the motion has been pending for the past four months as the DDC chairperson is a blue-eyed boy of the government.

“…This is no democracy,” the NC leader said, adding that in a democracy people are allowed to speak freely, criticise the government and speak the truth.

He said attempts are being made to break the NC, which is not ready to compromise, paddle falsehood, betray people, raise false slogans and do politics on the basis of religion and region.

“Conspiracies were being hatched against the the party since its inception but they witnessed a spurt after August 2019. The party leadership was detained on immaterial charges for months and their only aim was to break the NC,” Abdullah said, adding these attempts are still continuing.

Asking people what change they have witnessed on the ground since August 2019, he said, “If you report any improvement, I’ll stay silent and I’ll not come again to seek votes for my party.”

“Keep religion, caste, creed and regional politics aside and ask yourselves if there has been any improvement in our lives . If the answer is negative, we have to set the accounts straight at the time of voting,” he said, cautioning locals to remain vigilant against polarisation attempts ahead of the polls.

Abdullah said he was not in Kishtwar to seek votes as the election bugle was yet to be sounded. “We need to remain cautious of the powers which are sowing seeds of hatred with the announcement of polls to divide people for political gains.”

He said power projects started by his government in 2009-2015 in Kishtwar are yet to be completed.

“We do not have oil, gas or gold mines but God has bestowed the region with beauty and rivers which we tried to exploit for the betterment of people… When there will be change in the government, we will refocus on it and will never snatch anyone’s rights,” he said. (KINS)

Complainant of missing lady turns out to be her killer