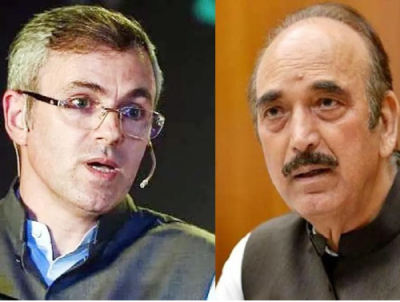 Jammu , Nov 29 ( KINS) The rift within opposition ranks came to the fore after NC vice president Omar Abdullah disapproved of Congress leader Ghulam Nabi Azad’s comments on Article 370. Contesting Azad’s observation that it is “futile” to talk about Article 370 as it won’t be restored, Abdullah reminded him that the Congress party had incorporated it in the Constitution. Lamenting that the Sonia Gandhi-led party had conceded “defeat” at the outset, he stressed that the future of the people of Jammu and Kashmir was dependent on the restoration of the region’s special status.

Speaking at a rally in Kishtwar on Monday, former J&K CM Omar Abdullah remarked, “If (Article) 370 is our legacy, then (Article) 370 is a bigger legacy of Congress. (Article) 370 came into existence because of this country’s first PM Nehru Sahab. If Congress is not ready to save its own legacy, then how can they save others? Have they decided in advance what the decision of the court will be? The hearing is yet to commence in court. And we feel that our case is very strong. But these people have already conceded defeat and said that it is futile to talk about this.”

“The future of our children, their education, their jobs, our lands (is linked to this). When it comes to land to the tiller, we gave the land ownership right to the people without taking one paisa from them. That wouldn’t have been possible if Article 370 was not there. But these people are not ready to fight this battle. There is no problem, don’t fight. We will fight alone,” he added.

A Presidential notification combined with requisite legislation passed by both the House of Parliament in August 2019 led to Article 370 becoming virtually redundant. This implied that the special status of Jammu and Kashmir (J&K) was scrapped. Furthermore, the region was bifurcated into the Union Territories of J&K and Ladakh. Thereafter, restrictions on the movement of people and communication were imposed in the state, which was gradually lifted over the months.

After leaders such as former Chief Ministers Farooq Abdullah, Omar Abdullah and Mehbooba Mufti were released post months of detention, 6 political parties joined hands to form the People’s Alliance for Gupkar Declaration in August 2020. The principle aim of this alliance is to strive for the restoration of Articles 370 and 35A and statehood. Subsequently, PAGD emerged as the single-largest party in the first-ever District Development Council polls in J&K by bagging 110 seats. Chairing an all-party meeting on June 24, PM Modi promised that J&K will get an elected government after the delimitation process is over. ( KINS)