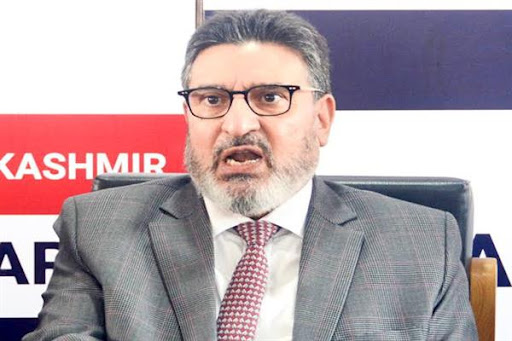 ‘NC and PDP are habitual of letting down the people’

Srinagar, Nov 30 (KINS): Apni Party President Syed Mohammad Altaf Bukhari on Tuesday expressed deep concern over the manner in which some of the political parties are trying to compromise dignity of the people of J&K by conspiring against the basic right of the people to have their Statehood returned to them.

Bukhari vowed that Apni Party will stay with its pledge and struggle till the Statehood is restored to Jammu and Kashmir. “There will be no compromise on this demand, come what may,” he remarked.

Bukhari said that since its inception, Apni Party in March 2020, made it clear that it wanted the Statehood restored to J&K at the earliest, while it requested the Supreme Court to decide the matter regarding Abrogation of Article 370 without any further delay keeping in view aspirations of the people.

He said that by their overtures and public posturing it seems that National Conference and PDP are conspiring against restoration of Statehood because they know that Apni Party is the sole party that had taken a firm stand on the issue from day one since this arbitrary decision was taken.

“Simply for the reason of their partisan interests, these parties have started working against Statehood for J&K. Their promise of reuniting Ladakh and J&K is also hollow,” Bukhari observed, adding that knowing all this, they want to show that Statehood too is not possible so that they can avoid accountability to the promises that they had made earlier.

He said that Apni Party has time and again maintained that its politics would be rooted in realism. Bukhari said that Apni Party laid emphasis on restoration of Statehood because snatching away this status had inflicted an assault on the identity of the people of Jammu and Kashmir.

He recalled that this demand was listed in the Apni Party memorandum that was submitted to Prime Minister Narendra Modi and Home Minister Amit Shah from time to time since the inception of the Party.

That time, he said, parties like NC and PDP had started leveling baseless charges, and now they are conspiring to fulfill their petty political ambitions by agreeing to the UT as the final status of Jammu and Kashmir.

“Now these parties have started beseeching for elections in the current status by trying to undermine the idea of the restoration of statehood. Their high mark of getting Article 370 has been edged out of the discourse, and they are maintaining mysterious silence on the restoration of the Statehood to J&K,” Bukhari averred.

This climbdown is a betrayal of the people, but it is not surprising as NC and PDP are habitual of letting down the people– by making false promises, hoodwinking the masses, and then finally signing the surrender agreements, he added.

“These parties stand exposed as the political opportunists who can compromise on anything. Their slogans were always hollow. In the process they are suppressing the people’s wishes, and now they are deflecting the real issues by adopting diversionary tactics. On the other hand, Apni Party is committed to the struggle for restoration of Statehood and it will not concede an inch on it,” he added. (KINS)

Parts of Valley receive snow as rains abate after 48 hours

Valley’s new dawn: An era of development and inclusion beckons

Soldier killed, another injured as grenade goes off accidentally in Kupwara