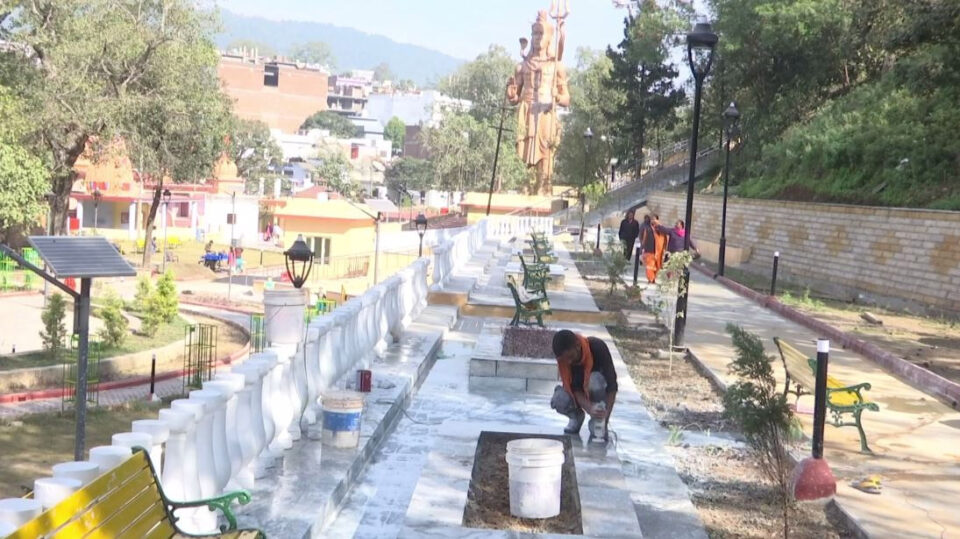 Udhampur, Dec 1 ( KINS): In a bid to increase the footfall of tourists and boost employment opportunities in Jammu and Kashmir’s Udhampur, the beautification work around Devika river is underway at war footing.

The project namely, ‘Devika Rejuvenation and Beatification’ has been taken up under National River Conservation Plan (NRCP), being executed by Urban Environmental Engineering Department (UEED) and its estimated cost is Rs 190 crore.

Notably, Prime Minister Narendra Modi in February 2019 laid the foundation stone of the project aimed at reducing pollution of Rivers Devika and Tawi under the NRCP.

Earlier this year, Union Minister Dr Jitendra Singh had visited the site of the Devika Rejuvenation Project. He had said that the River Devika National Project in Jammu and Kashmir is going to reflect our collective pride and faith, and will be the first-of-its kind in North India.

In June last year, Dr Singh had also inaugurated the Devika Bridge in Udhampur. Apart from taking care of traffic congestion, the bridge is also meant to help smooth passage of Army convoys and vehicles.

The locals have lauded the government and concerned authorities that have undertaken the work.

Rohit, a resident of Udhampur said, “The beautification work will mesmerise the tourists. The footfall in Udhampur will also increase as people will come to see the Devika River, just like people visit Haridwar for the holy Ganga river. A huge statue of Lord Shiv has also been installed here.”

Sunil Paroch, another local said, “After visiting Devika Ghat, I felt that I am not in Udhampur but in Haridwar. Because of this beautification work, the tourist flow will increase here. The locals and youths will also get employment.”

The Devika river holds great religious significance as it is revered by Hindus as the sister of river Ganga.

“For the past 2.5 years, the beautification work has been going on. Nearly 80-85 per cent work has been completed. The deadline for finishing the work is December. The face of Devika has completely changed. I thank the Prime Minister for sanctioning this ambitious project worth Rs 194.85 crore,” Arora said.

Under the Centrally funded Rs 190 crore NRCP Devika project, bathing ‘ghats’ (places) on the banks of the Devika River will be developed, encroachments will be removed, natural water bodies will be restored and catchment areas will be developed along with cremation ground.

The project includes the construction of three sewage treatment plants of 8 MLD, 4 MLD and 1.6 MLD capacity, sewerage network of 129.27 km, development of two cremation ghats, protection fencing and landscaping, small hydropower plants and three solar power plants. On completion of the project, the rivers will see reduction in pollution and improvement in water quality.

Shubham Sharma, project engineer, said: “With the initiation of this project, people visit this area. Devika Ghat has become a pit stop for tourists who earlier used to visit Vaishno Devi and then straight to Patni Top. With this project, several people here have also got employment opportunities. Within one month, we are expecting to complete the leftover work.”

People from Udhampur and all over the Union Territory and adjoining areas throng the banks of the Devika river to take a bath, which is considered holy, to free themselves from all sins.

Every year, on the occasion of Baisakhi Mela, Navaratri and Maha Shivaratri lakhs of devotees of all faiths visit the banks of river Devika .Devika, a small holy rivulet flowing through Udhampur, has temples of different deities including ancient Kamehswar Mahadev and temples of Ganga, Hanumana, Rama-Laxmana and Radha-Krishna. (KINS)