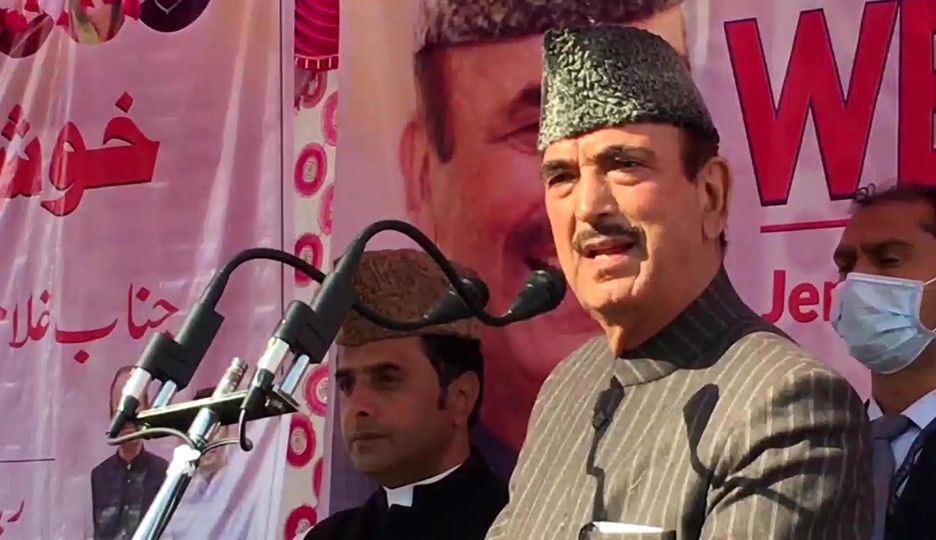 POONCH, Dec 1 ( KINS): Apprehending loss of ”jobs and land” to non-locals till the Supreme Court rules in a petition challenging the abrogation of Article 370, senior Congress leader Ghulam Nabi Azad on Wednesday asked the government to bring a bill in Parliament and restore Jammu and Kashmir’s statehood.
Without naming National Conference vice-president Omar Abdullah who recently criticised the Congress’ silence on Article 370, Azad said although the case is before the Supreme Court, he had opposed the move as ”unconstitutional” in Parliament several times as the leader of the opposition.
He asked all parties to unite and put pressure on the government to announce the much delayed assembly elections in Jammu and Kashmir within a week after the restoration of statehood.
”Chief ministership for me is meaningless at this moment when we have the biggest issue of safeguarding our land and jobs. The case with regard to Article 370 is pending before the Supreme Court and nobody knows when its judgment will come but till then we cannot wait and see our jobs and land go to people not from Jammu and Kashmir,” Azad said, addressing a party convention in the border district of Poonch.
He said the prime minister and the Union home minister have already promised the restoration of statehood to Jammu and Kashmir, and therefore, the government should bring a bill in Parliament for this and also include in it constitutional safeguards to protect land and jobs of the people of Jammu and Kashmir.
Azad said elections can happen immediately after the winter ends as the security situation has improved.
Besides the apex court, only the BJP-led government can reverse its decision.
”I do not see it good to make any false promises to the people. We cannot promise that we will form the next government at the Centre with 300 MPs and will do it (revoke the August 5, 2019 decision),” the veteran Congress leader said.
All opposition parties need to stand and press for elections soon after the end of the winter as a popular government alone can address the issues being faced by the people of Jammu and Kashmir, he added.
”Former prime minister Indira Gandhi used to say that we need to take more care of the border residents as they are the ones who are standing shoulder-to-shoulder with our forces to safeguard the country and also suffer the major brunt in case of shelling and firing,” Azad said.
Paying tributes to the people and the security forces, he said the government of the day should serve the people of border areas with an open heart.
Appealing to the people to reject political parties seeking votes in the name of religion, the Congress leader said, ”Let the people decide who they should vote for based on the report card of the government.” He also lauded the people of Poonch district for maintaining brotherhood and communal harmony.
”We are proud of our nation which is based on secularism and binds people of different faiths together. There is complete harmony among various communities,” Azad said.
”People doing politics on the basis of religion, region, creed or caste have no right to govern the public,” he said, adding, ”People can be won over by love and not by the use of power.” (KINS)

Militant held with arms and ammunition in Kishtwar

Indian Army organises lecture on Role of Youth in society