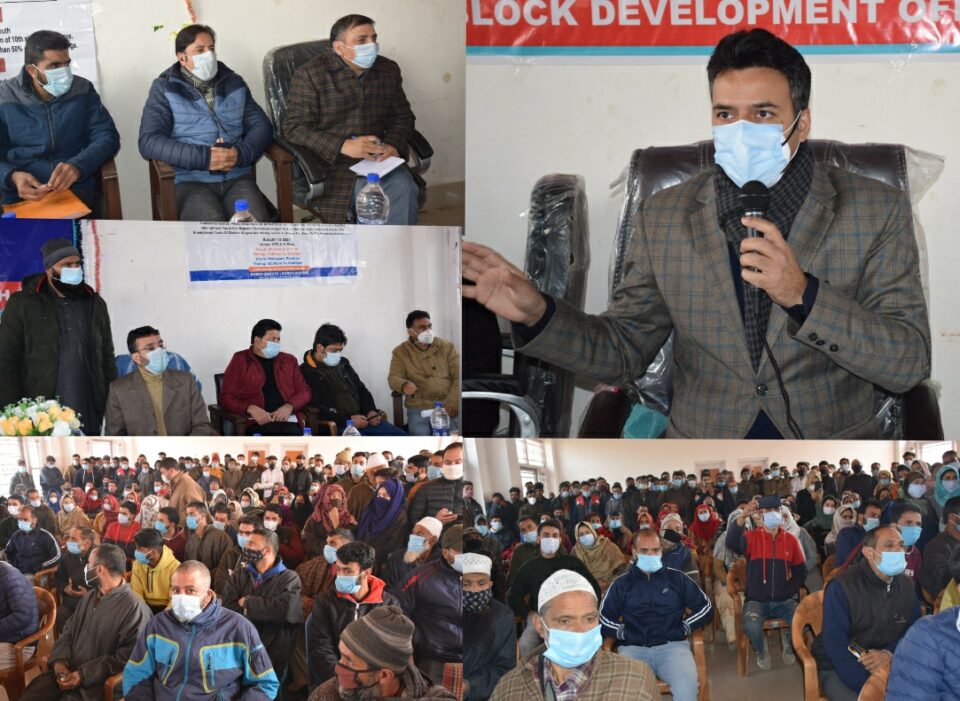 During the grievance redressal programme, officers and officials from line departments listened to issues, grievances and demands of the people at all the three venues for their timely redressal.

Meanwhile, to take first hand appraisal of public grievances and demands, the Deputy Commissioner (DC) Kulgam, Dr.Bilal Mohi-Ud-Din Bhat presided over grievance redressal camp at D.H.Pora block, where he listened to grievances and issues of people for redressal.

Programme witnessed  immense and overwhelming response of public and huge number of people from all areas of Noorabad including scores of youth  participated in this grievance redressal camp and highlighted there issues for timely redressal.

People from Ahmadabad,Kounsarbal, Yadikhah,Koreal,Nagam, Gujjar Basti Hallan, Nandimarg, Laisoo,D.H.Pora, Dainipora,Mandgori and other areas attended the programme and apprised the Deputy Commissioner about their issues and grivences.

PRI members also participated in the grievance redressal camp and highlighted various issues and grievances of their areas.

People from Yarikhah demanded repairment of Dainpora-Checki Nagam road.  People from Asnoor Kavtikri demanded road connectivity to the area, A delegation from Nandimarg demanded for construction of bridge from main road to old high school, Construction of road from Cheki nagam to Nandimarg, sanction of Aganwadi center for the village.

A delegation from K.B.Pora demanded repairment of damaged sidewalls of Aharbal Canal at K.B.Pora site.

People from other areas also raised their issue and apprised the Deputy Commissioner of various grievances of their area for redressal.

Youth club members also participated in the programme and raised issues of their areas for redrssal.

The DC after giving patient hearing to the delegations, he redressed various issues on the spot. With regard to other demands, he assured that the same will be taken up with concerned higher authorities.

While responding to demand of playfield by Youth the Deputy Commissioner directed the ACD to ensure Devlopment of Playfields at Koursarbal, Laisoo witin days.

With regard to supply of pure drinking water concerned from jal Shakti were directed to ensure smooth water supply to these areas.

Addressing the gathering, the Deputy Commissioner said that the main objective of the programme is to mitigate the problems and grievances of the public at their doorsteps.

Registration facilities for e-SHRAM and Sehat cards were  also available during this function.

Block Diwas functions were also held at Kulgam and Pahaloo  blocks where officers listened to the issues of people for redressal.( KINS)