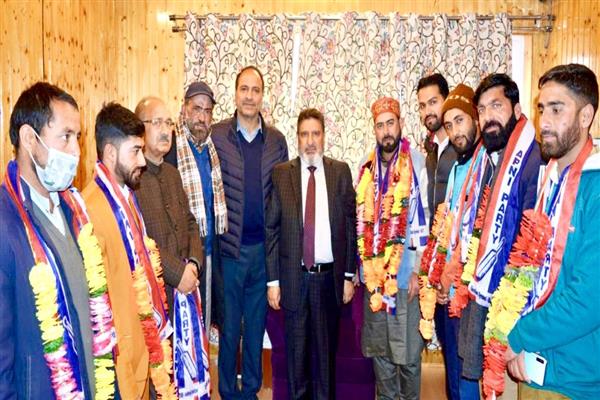 Srinagar , Dec 2 ( KINS) Apni Party President Syed Mohammad Altaf Bukhari on Thursday said that after the abrogation of special status to the erstwhile state of J&K, Apni Party raised the suppressed voices of the people while traditional political parties remained mute spectators to the then prevailing situation.

He said the people of J&K no longer trust the emotional blackmailing and false promises that are being currently raised by these political parties to lure people for mere electoral gains.

“If these political parties would have sincerely cared for the welfare of the local populace, then J&K would not have been lagging behind in developmental progress. However, Apni Party has stood firmly against the tide and became the people’s voice while the political leaders maintained an agonizing silence & forsook the people at a time when they needed them the most,” he said.

He also said that after the DDC elections were over, PAGD promised people to strive for reinstating the pre-August 5, 2019 position in Jammu and Kashmir but appallingly they have once again backtracked to their earlier commitment.

“These political parties have often made towering claims that were never meant to be fulfilled. However, they are acting complacent to its huge ramifications while blatantly playing with the public sentiments. Apni Party is resolute to bring in people towards the mainstream politics through propagating its development based agenda at the grassroots level,” he observed.

Bukhari said that Apni Party is a development oriented political platform that has sincerely expressed its areas of thrust since the day of its inception. “The party has always focused on progressive issues that concern the prosperity and wellbeing of the people as we stand committed for an equitable development of all the region of J&K without resorting to emotive sloganeering or false promises,” he added.

Welcoming the new entrants into the party-fold, Bukhari impressed on the new entrants to work diligently in their respective areas and put forth sincere efforts for the redressal of the public grievances.

On this occasion, the new entrants thanked the party leadership for providing them with a relatable political platform and vowed to further strengthen the party at grassroots level.( KINS)