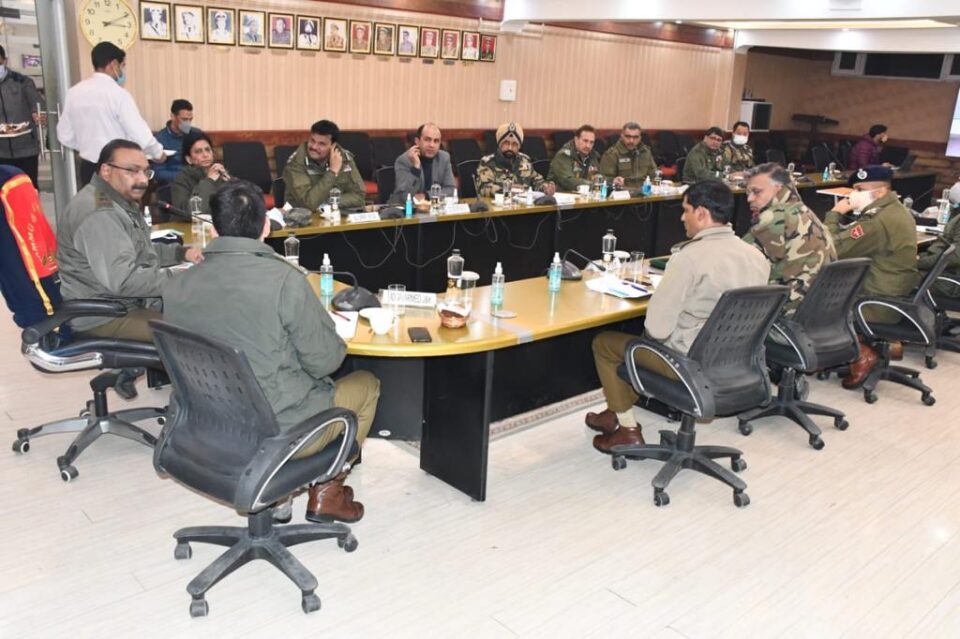 Jammu, 03 December ( KINS): The Director General Police J&K Shri Dilbag Singh today chaired back to back meetings at Srinagar.
In the forenoon the DGP chaired a Police Establishment Board (PEB) meeting via video conferencing and in the afternoon he chaired joint security review meeting at PCR Kashmir, which was attended by senior officers of Police, Army and CAPF.
The Police Establishment Board meeting was attended by Spl. DGP CID, J&K,R. R. Swain, Spl. DGP Crime, J&K,A. K. Choudhary, ADGP Security, J&K, Dr S. D. Singh Jamwal, ADGP Headquarters, PHQ, M. K. Sinha, ADGP Railways, J&K, Sunil Kumar, ADGP Coordination, PHQ, Shri Danesh Rana, AIGsP of PHQ Ramesh Angral, J. S. Johar, Manoj Pandita, and other concerned officers of PHQ.
The DGP flanked by ADGP Armed, J&K, JM Gillani and IGP Kashmir Vijay Kumar chaired the meeting via video conference from PCR Kashmir while other officers attended the meeting at Conference Hall, PHQ.
During the meeting various agenda points pertaining to capacity building and welfare of the jawans were discussed. All the agenda points were taken one by one and discussed threadbare and appropriate decisions taken on each.
The DGP said that various wings of police need to rationally review their deployments and see that persons posted at a particular location for very long are transferred out and replaced with suitable persons. This he said will enhance the capabilities of these units.
He also said that unauthorised attachments and localised arrangements should be done away with and cases be reviewed and recommendations must be justified while giving emphasis on encouraging the deserving personnel.
He said that the recommendations must be performance based and due weightage must be given to the circumstances, topography, and difficulty faced besides the perseverance and operational acumen displayed by the personnel must be taken as the touch stone for recommendations.
he DGP further stated that only those personnel should be rewarded who contributed to the professional work.
During the meeting different representation/petitions and directions from the various judicial authorities were also discussed.
AIG (Personnel) PHQ conducted the proceedings of the meeting and presented the backgrounds of each and every agenda item.
Pertinent to mention that during the year 2020 upto July 2021 out of turn promotions were given to four ASIs, forty HCs, 160 SgCts, 475 Cts and four Followers for their outstanding contribution and 393 SPOs were also absorbed in the department as constables for their outstanding duties.
In the afternoon the DGP chaired a joint security meeting at Police Control Room (PCR) Kashmir to review the security scenario in Kashmir Zone.
The meeting was attended by ADGP Armed J&K Shri SJM Gillani, IG (KOS) CRPF Shri Deepak Rattan, IGP Kashmir Vijay Kumar, IG (SOS) CRPF Ms Charu Sinha, DIG CKR Srinagar Shri Sujit Kumar, BGS Ops 15 Corps P K Mishra, DIG CRPF North Srinagar Dr Randeep Kumar Rana, DIG CRPF South Srinagar Shri Mathew A John, DIG BSF Ops Srinagar Arvinder Singh, SSP APCR Srinagar Shahid Mehraj Rather, SSP Srinagar Sandeep Choudhary, SSP PCR Kashmir Zubair Ahmed Khan and SP PC Srinagar Iftikar Talib.
Spl. DGP CID J&K, R. R. Swain attended the meeting through video conferencing from Jammu.
Speaking to the officers the DGP expressed satisfaction over the synergy existing between the officers and formations of forces. He expressed hope that together security forces will continue to work harder for greater peace. The DGP stressed upon the officers not to let the peaceful atmosphere be disturbed by the elements inimical to peace by effectively and sincerely handling the lawful duties and commitments.
The DGP said that the action against terrorists and their OGW networks and handlers should be continued unabated and all such elements should be kept under check so as to foil their ill designs that are aimed at disrupting normal lives of the people. He said that security grids need to be kept fully geared up at all levels with joint efforts of all security forces and agencies. He directed officers to review the security strategies more often so as to check for any loopholes if ignored. The DGP also took a review of the winter preparedness.
He appreciated the forces for the recent successes against terrorism but stressed for continued pressure on terrorists/OGWs to consolidate the peace. He directed the officers to stay focused and to maintain surveillance on the support system of terrorists. He said that Pakistani agents and their handlers here are always looking for soft targets to foment trouble in the much better prevailing security scenario in J&K.
Officers from CRPF, Army, and BSF shared their views and assessments in the meeting.( KINS)

One Chickenpox Case detected in Shopian