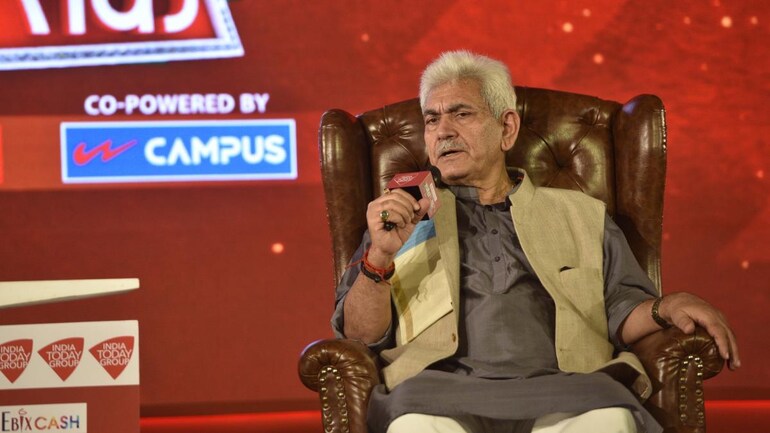 New Delhi, Dec 4 ( KINS)  Jammu and Kashmir Lieutenant Governor Manoj Sinha has played down the sense of fear among people from other states staying in the Union Territory of Jammu and Kashmir following a series of targeted killings of migrant workers.

Responding to a question on the prevailing security situation after the killings of migrant workers, Manoj Sinha said, “I am assuring the nation that you come here. You are welcome here. Your security is our responsibility.”

Is Kashmir at gun-point?

“Has there been any increase in deployment of army? Army’s deployment has not increased. If a killing takes place [in Jammu and Kashmir], it is said the government is unable to provide security,” Manoj Sinha said.

“If we say that we will secure the places which did not have the dominance of forces and which supplied oxygen and fertilisers to terrorism, are we committing a crime by demanding five companies of forces?”

“I give assurance that neither the forces nor the CAPF or the Jammu and Kashmir Police would be used against an innocent person. And, if something happens, law will be used against those people [in the forces] as well. I am saying it in public.”

“Probe into the incident has been ordered. If an innocent person has been killed, I assure that the guilty won’t be spared,” Manoj Sinha said.

Four persons were killed in an encounter in Hyderpora area of Srinagar on November 15. The police allegedly buried the bodies hurriedly. Protests were held by several groups including the political parties which alleged that innocent people targeted by the security forces.

“Where there are humans, there would be corruption. Use of technology will bring transparency. We are moving towards that system,” Manoj Sinha said.

On the question of the return of Kashmiri Pandits who were forced to leave their homes in the Kashmir Valley during late 1980s and 1990s, Manoj Sinha said the prime minister’s package aimed at building 6,000 homes and creating jobs for them was just a beginning.

“It was not our manzil [destination]We are taking measures that will show results soon. Not right now, but in three months, things will be clearer. The nation would know then the return of Kashmiri Pandits will be a reality,” Manoj Sinha said.

Who the Centre would talk to?

Manoj Sinha dismissed the possibility of the Centre’s dialogue with the separatist leaders, saying that only those who believed in the Indian Constitution were the stake holders in Jammu and Kashmir.

He said, “Earlier, those who disrupted peace and fomented separatism in Jammu and Kashmir were provided medical treatment by flying them in special planes. The days of soft separatism are over. Now, talks will happen with only those who believe in the Indian Constitution.”

Who are the stake holders in Jammu and Kashmir?

“The people of Jammu and Kashmireven a political party because it is part of the Janata [public],” Manoj Sinha said.

Manoj Sinha evaded a response on former LG of Jammu and Kashmir Satyapal Malik, current governor of Meghalaya who recently criticised the present administration of the Union Territory. Malik had said that during his days as Jammu and Kashmir LG, the terrorists did not dare to come within 50 kilometres of Srinagar. The situation under the current administration is different, he said.

Manoj Sinha said, “Satyapal Malik is a friend of mine. I don’t have the experience with the army that he has. I won’t comment on what he said.”

Will Jammu and Kashmir go to the polls after integration of the Union Territories of J&K and Ladakh?

“The Union home minister has said it in Parliament. That holds valueOn August 15, the prime minister said it from the Red Fort that election would take place after delimitation.( Source India today.com )

Congress urges JK UT to take up the matter with MEA

Even after constituting of commission, Delimitation process stuck in “glitches”