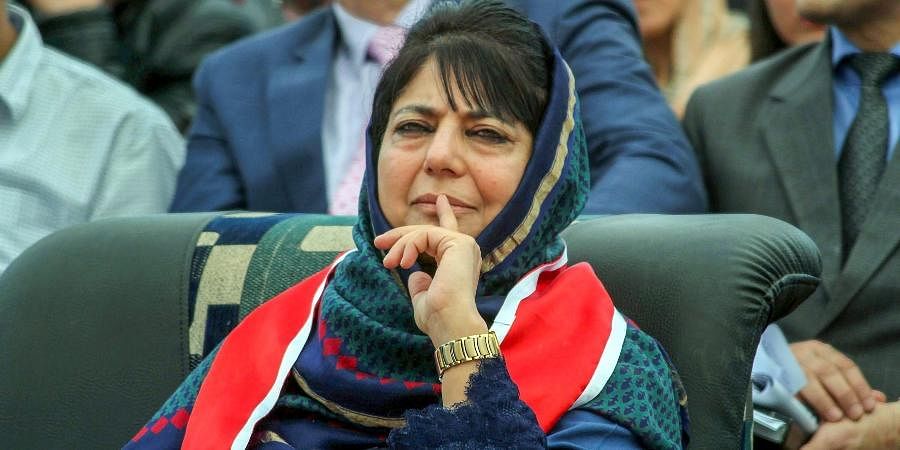 NEW DELHI, Dec 6 ( KINS): Former Jammu and Kashmir chief minister Mehbooba Mufti staged a dharna at Jantar Mantar here on Monday to protest the alleged repression of people of the union territory and demanded that killing of innocents be stopped immediately.
The Jammu and Kashmir Peoples Democratic Party (PDP) president said she decided to stage a dharna in the national capital as she was never allowed to register her protest in Kashmir.
She said she was either detained at her house and whisked away by police every time she planned a protest.
“Kashmir has become a prison where people are not allowed to express their opinion. They are being repressed since August 2019 and what surprises me is how the government is busy portraying that everything was hunky-dory in the valley with the help of some of the paid media,” she told reporters.
In August 2019, Jammu and Kashmir special status under Article 370 of the Constitution was abrogated and the state was bifurcated into union territories.
The former chief minister denied the charge that she raised questions on every police action.
“Whenever there is an encounter and a militant gets killed, nobody questions but when a civilian gets killed, only then people come out and start asking questions,” she said.
Carrying a placard that read “Kashmir is in pain”, Mehbooba said, “You have seen what happened in Nagaland where 13 civilians were gunned down. An FIR has been lodged immediately. Why does the same not happen in Kashmir as well? Though I do not have much hope that anything is going to come out of these enquiries but still the government is seen acting.”
She alleged that corruption was at its peak in Jammu and Kashmir, local residents were being deprived of jobs and blood of innocents was being spilled on roads.
“I have come here to tell the people of this country that if they don’t wake up even now, the day is not far when the nation of (Mahatma) Gandhi and (B R) Ambedkar will get converted into (Nathuram) Godse’s country and after that we all will be helpless,” she said.
Several photo journalists requested Mehbooba to remove her mask for a better picture but she replied with a visible smile on her face, “if I remove the mask, I can be booked under UAPA immediately”.( KINS)