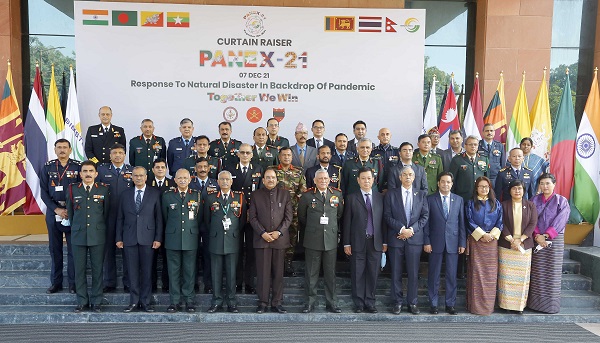 New Delhi, Dec 7 ( KINS): Amid the ongoing COVID-19 pandemic, Chief of Defence Staff (CDS) General Bipin Rawat on Tuesday warned that this may be developing into biological warfare and in such case, the nations need to be prepared to counter it.

At the curtain raiser event of the disaster management exercise involving BIMSTEC member countries, Indian Army Chief General Manoj Mukund Naravane also warned about the emergence of new variants and resurgence of cases which suggests that COVID-19 is far from over.

Countries including Bangladesh, Nepal, Myanmar, Bhutan, Thailand, Sri Lanka and India are participating in the exercise.

“Another issue I would like to highlight is, is this is also becoming a new kind of warfare… If biological warfare is beginning to take shape, we need to put our act together and strengthen ourselves to ensure our nations are not affected by these viruses and diseases,” CDS Rawat said at the PANEX-21 curtain raiser event.

He said that now the Omicron variant of COVID-19 is also there and “if it is going to mutate in other forms, we have to remain prepared for it.”

General Rawat said, “it is very important for all of us that we put our heads together and support each other in any of our nations.”

The CDS also pointed out that the armed forces of the world have to make special preparations to counter disasters as during COVID-19, it could be seen that the defence forces were used by every nation to reach out and help their civilian population.

The event was also attended by Minister of State for Defence Ajay Bhatt who asked the member nations to work jointly in fighting natural and man-made disasters. (KINS)

Mercury under free fall in Jammu and Kashmir, Ladakh

PM must suspend all his political activities till missing pilot returns safely: Omar