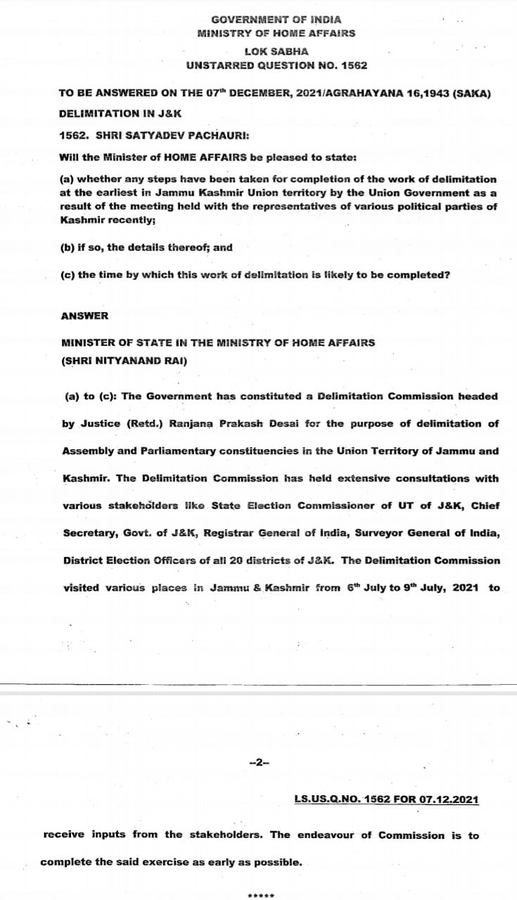 New Delhi, Dec 7 ( KINS): The delimitation of Assembly and Parliamentary constituencies in Jammu and Kashmir will be completed as early as possible, the Central government told the Lok Sabha on Tuesday.

Local administration and its officials have taken a wide variety of surveys in the Union Territory pertinent to the delimitation exercise earlier in the year.

Responding to questions raised on the progress in the delimitation of J&K, MoS Home Nityanand Rai told Lok Sabha: “The government has constituted a Delimitation Commission headed by Justice (Retd) Ranjana Prakash Desai for the purpose of delimitation of Assembly and Parliamentary constituencies in the Union Territory of Jammu and Kashmir.”

Concluding his reply, the union minister said, “The Delimitation Commission visited various places in Jammu and Kashmir from July 6 to 9, 2021, to receive inputs from the stakeholders. The endeavour of the Commission is to complete the said exercise as early as possible.”

In August 2019, Jammu and Kashmir special status under Article 370 of the Constitution was abrogated and the state was bifurcated into union territories.

The last Assembly elections in the mountain state took place in 2014 and were scheduled to be held again in 2019, however, due to the abrogation of special status and bifurcation exercise, they were delayed.( KINS)