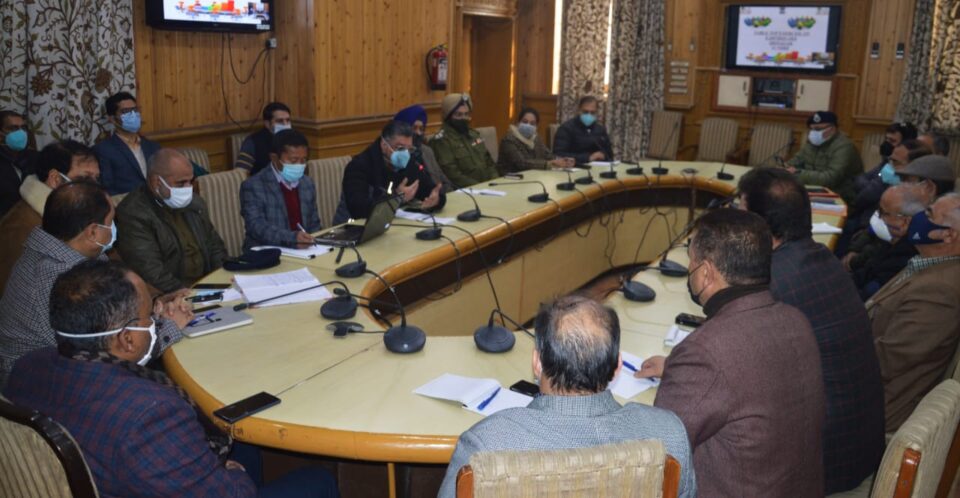 The meeting held threadbare discussion on the Response, Rescue and Rehabilitation preparation plan and strategy to mitigate the damage and loss of lives and property during high intensity earthquakes and other disasters.

He stressed that concerned departments need to maintain satellite phones and wireless communication devices to be used for quick response, search and rescue.

The officers held a brainstorming discussion on how to carry out damage assessment at the time of disaster so that resources can be allocated for disaster response and relief operation.

Div Com further directed district administration, Srinagar to loop in imams whose services shall be used to inform and educate people regarding dos and don’ts during earthquake. Also, he said that pamphlets on do’s and don’ts regarding  every hazard should be distributed among the imams and heads of other worship places so they educate people on the right time with right information.

Besides, he stressed on identification of open spaces where people could be temporarily shifted at the times of disasters for safety.

He also directed for preparing vulnerable maps for hazards and compilation of details of buildings and structures regarding their strength.

Regarding the assessment of damage due to the earthquake, Div Com stressed on the usage of drones and ground teams for preparing the report of loss.

He also directed all the departments to conduct mock drills to commensurate preparation and response to a disaster.

Meanwhile, experts on the occasion highlighted the need for earthquake resistant buildings and other infrastructure, communication on wheel and communication balloons, so the impact of hazard shall be mitigated.( KINS)

Pay and use selected hotels during quarantine period in Srinagar

23 years after shunning the gun, youths from North Kashmir say it was the ”best decision”