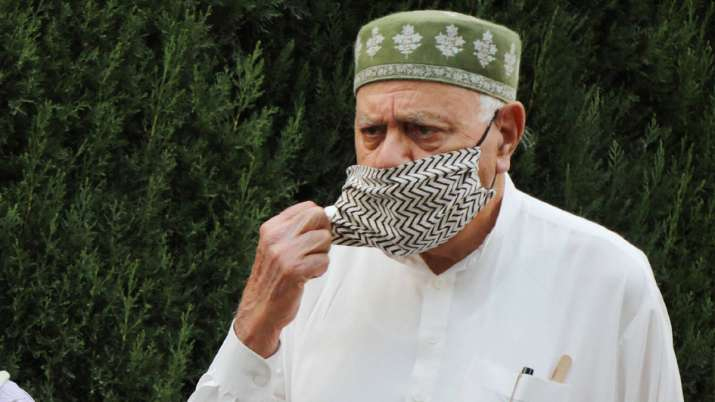 JAMMU, Dec 7 ( KINS): A demand for the restoration of full statehood of Jammu and Kashmir along with the provisions of Articles 370 and 35-A of the constitution were among the seven resolutions passed by the National Conference on Tuesday in a meeting here chaired by party president Farooq Abdullah.

Its other demands included restoration of the ‘darbar move’ practice, special package for the tourism industry, employment for youth, implementation of the Mandal Commission recommendations in Jammu and Kashmir, a legal guarantee of minimum support price for crops and slashing prices of essential commodities.

The resolutions were adopted at a day-long convention of the NC’s central zone, comprising the Jammu, Samba and Kathua districts, held at Sher-e-Kashmir Bhawan here.

The party alleged that Jammu and Kashmir has been ”downgraded and downsized by bifurcating it into two Union Territories disrupting the social fabric, integrity and composite culture of the erstwhile state.” ”The three regions of the erstwhile state of Jammu and Kashmir were having different languages and cultures which were being shared and enjoyed by the people of all three regions equally and peacefully,” the NC said.

Another resolution called for the restoration of the 149-year-old tradition of ‘darbar move’, under which the government functioned from Srinagar and Jammu for six months each. The practice was ended by the administration under the Lt Governor last year.

”Around 8,000-9,000 employees working in civil secretariats, with headquarters in Jammu and Srinagar, used to shift from one headquarter to another. It was a unique practice which had strengthened the relations of the people in the two regions sharing their culture, secular fabric and socialism as well. ”The move used to boost economic activities as well in both the capitals. Ending this practice not only will shatter communal harmony, brotherhood and strong relations between Dogra, Kashmiri and Ladakhi culture but has also brought commercial activities to a standstill,” the resolution read. Another resolution demanding a special package for the tourism industry was passed by the NC. The party promised that, if voted to power, it would redress the grievances of the tourism industry and will explore more tourism places in Jammu as well as Kashmir regions.

The resolution legal guarantee of MSP said, ”As the farming community has been fighting for passage of legislation for MSP, the National Conference supports their just and genuine demand.” It also demanded compensation to the farmers for the damage to their crops due to hailstorms and torrential rains.

”The farmers are being harassed and tortured by snatching away their lands under cultivation forcing them to adopt the path of agitation. We stand with these farmers and appeal to the government to defer this campaign till a popular government is established in Jammu and Kashmir,” the NC said.

Claiming the unemployment rate in Jammu and Kashmir was at an ”all-time high” of 22.2 per cent and the highest among all the Union Territories and the states, the party demanded adequate employment opportunities for the youth.

”The government must review its employment policy and must absorb all those at the verge of becoming over-age,” the resolution said. (KINS)

Two IT Parks coming up in Srinagar and Jammu: Dwivedi