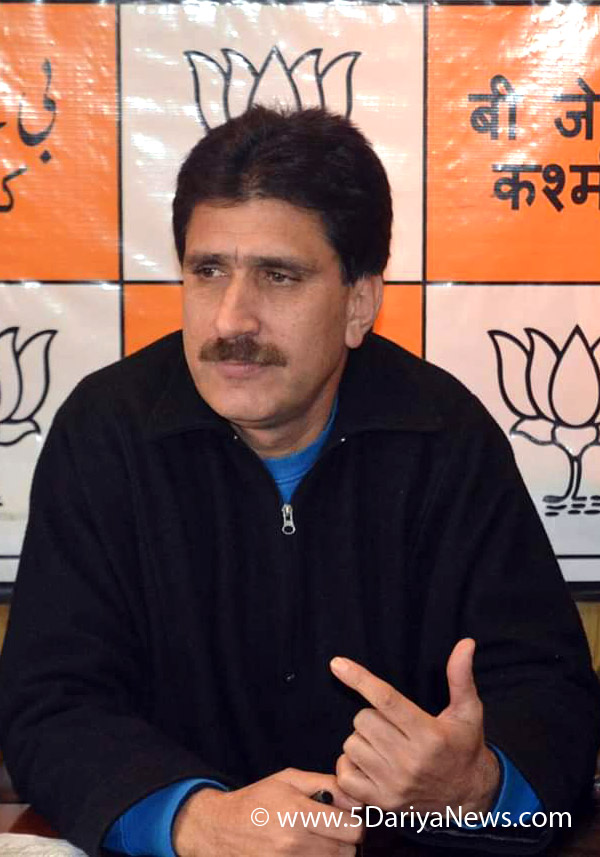 Srinagar, Dec 7 (KINS) A senior Bhartiya Janata (BJP) party leader on Tuesday questioned the “logic” of Peoples Democratic Party (PDP) Chief Mehbooba Mufti on Article 370, saying she was ” day dreaming” about brining back the J&K specail status.BJP leader Altaf Thakur who is also spokesman of the party took a “jibe” at PDP chief Mehbooba Mufti who staged a protest

in New Delhi along with party men, stating that the “PDP chief should give logic as to how she can bring back something that has been rolled back by none other than the parliament of India with full majority”.

“PDP chief claims to be a popular leader but unfortunately she could gather only six party men to stage a protest in Delhi”, Thakur claimed.

He sid, “Mehbooba claims that she will get back Article 370, but I wonder how the former chief minister of J&K has started “day-dreaming” about it”, Thakur said while addressing a public gathering at Town Hall Pampore.

He said, “time has gone when leaders like Mehbooba would befool people by waving green flags and green handkerchiefs as people of J&K UT are mature enough to understand the political gimmicks of party’s like PDP and its head”.

“Article 370 was rolled back by India’s supreme institution called Parliament with the votes of over 300 MPs. How come the PDP leader can bring it back,” Thakur questioned and said that the PDP leader should stop her moves aimed at hoodwinking people of Kashmir by raising slogans about something that would never come back”.

Thakur said that Article 370 has gone forever and J&K is at par with any other Indian state/UT and would be at the top on development and peace fronts.

“Dynasty politics has ruined J&K and the BJP government has closed the chapter of family rule forever,” he said, adding that people of J&K will never vote in favour of those who filled their own coffers to meet their petty political goals.Thakur urged people to stay alert and not to fall prey to hollow slogans of some parties whose ultimate aim is to grab

power. He said the BJP led regime is committed to promote the saffron town of Pampore on modern lines and make it a model town of Kashmir.( KINS)

BJP is pursuing a policy of ‘divide and rule’: Mir

Measures to prevent spread of coronavirus in Srinagar: Strict instructions issued to travel and transport operators to adhere to guidelines

One Nation, One Election: Is it possible in a state with special status?