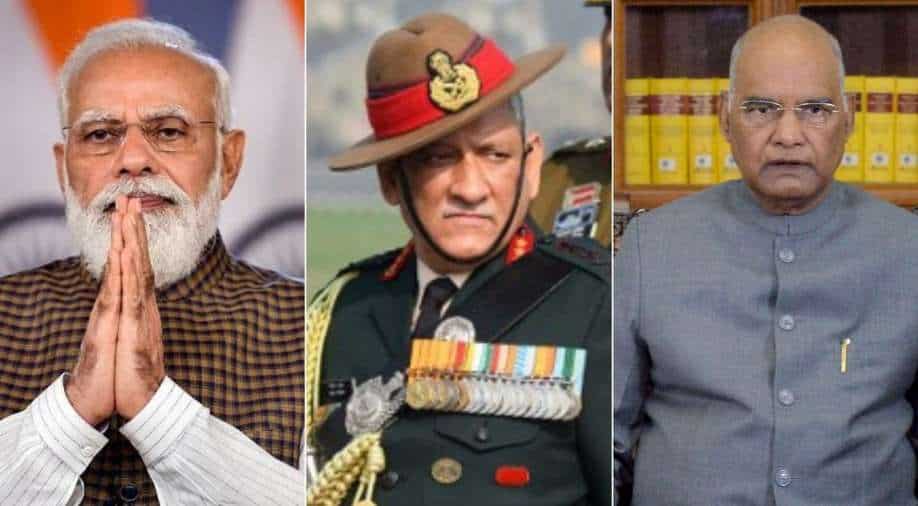 New Delhi, Dec 8 ( KINS) President Ram Nath Kovind, Prime Minister Narendra Modi and several other leaders and politicians expressed their grief and shock over the death of chief of defence staff General Bipin Rawat, his wife Madhulika and 11 others in a chopper crash near Coonoor in Tamil Nadu’s Nilgiris district on Wednesday.

The President said it is deeply painful to learn of the loss of lives in the crash. Regarding Rawat, he said the nation lost one of its bravest sons and that his four decades of selfless service to the motherland was marked by exceptional gallantry and heroism.

“It’s deeply painful for me to learn of the loss of lives in the chopper crash. I join the fellow citizens in paying tributes to each of those who died while performing their duty. My heartfelt condolences to the bereaved families.”

“I am shocked and anguished over the untimely demise of Gen. Bipin Rawat and his wife, Madhulika ji. The nation has lost one of its bravest sons. His four decades of selfless service to the motherland was marked by exceptional gallantry and heroism. My condolences to his family,” he wrote on Twitter.

Expressing his grief, Prime Minister Narendra Modi said, “I am deeply anguished by the helicopter crash in Tamil Nadu in which we have lost Gen Bipin Rawat, his wife and other personnel of the Armed Forces. They served India with utmost diligence. My thoughts are with the bereaved families.”

Stating that the sudden death of Rawat brought irreparable loss to the country, defence minister Rajnath Singh said, “Deeply anguished by the sudden demise of Chief of Defence Staff Gen Bipin Rawat, his wife and 11 other Armed Forces personnel in an extremely unfortunate helicopter accident today in Tamil Nadu. His untimely death is an irreparable loss to our Armed Forces and the country,” Singh wrote on Twitter.

Home minister Amit Shah said the CDS had served the nation with utmost devotion. “A very sad day for the nation as we have lost our CDS, General Bipin Rawat Ji in a very tragic accident. He was one of the bravest soldiers, who has served the motherland with utmost devotion. His exemplary contributions & commitment cannot be put into words. I am deeply pained,” Shah said in a tweet.

Congress leader Rahul Gandhi said the nation stands united in this grief. “I extend my condolences to the family of Gen Bipin Rawat and his wife. This is an unprecedented tragedy and our thoughts are with their family in this difficult time. Heartfelt condolences also to all others who lost their lives. India stands united in this grief,” Rahul said in a tweet.( KINS)

Officials directed to increase RT-PCR testing, Rs 20,000 fine to be imposed on those who hide travel history in Kashmir

Those skipping exams will lose their studentship: JNU