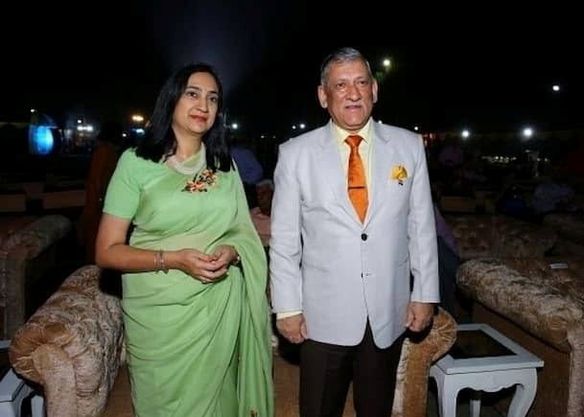 The Rawats are survived by their two daughters Kritika and Tarini.

The only survivor of the crash, Group Captain Varun Singh, is under medical treatment at the Military Hospital in Wellington. Rawat survived a Cheetah chopper crash on February 3, 2015 in Nagaland’s Dimapur. He was a lieutenant general at that time.

“With deep regret, it has now been ascertained that Gen Bipin Rawat, Mrs Madhulika Rawat and 11 other persons on board have died in the unfortunate accident,” the IAF said in a statement.

The dead include Rawat’s defence assistant Brigadier LS Lidder and his staff officer Lieutenant Colonel Harjinder Singh, officials said. Fourteen people, including the chopper’s crew, were on board the Russian-origin Mi-17V5 helicopter.

Rawat was on a visit to the prestigious Defence Services Staff College (DSSC) at Wellington to address the faculty and student officers. Singh, the sole survivor and a decorated pilot, is a staff member at DSSC.

An inquiry has been ordered to ascertain the cause of the accident, the air force said. The chopper was on its way from the Sulur airbase to DSSC at Wellington. The CDS and his wife had flown to Sulur from New Delhi in an Embraer jet of the IAF’s VVIP communication squadron.

Rawat took over as India’s first CDS on December 31, 2019, after serving as army chief for a full three-year term. He was the longest-serving four-star general in the country’s military history. Rawat was spearheading the military’s theaterisation drive to enhance the effectiveness of the armed forces and reshape the conduct of future operations.

From changing the face of United Nations peacekeeping in the Democratic Republic of Congo (DRC) to initiating the biggest exercise to restructure the army to closely supervising India’s two publicly acknowledged surgical strikes on foreign soil, Rawat, a rare general who did not play golf, brought enormous experience to the table as India’s first CDS.

Those who have known the general for several decades say Rawat always thought outside the box, took hard decisions and was not afraid of challenging the status quo.