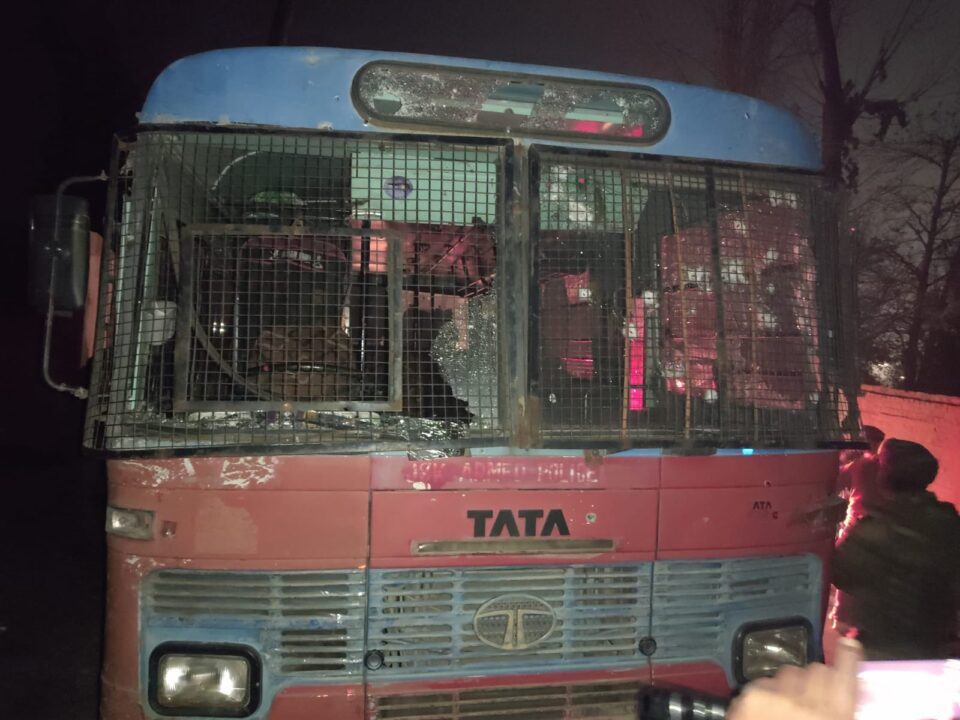 Srinagar, Dec 13 ( KINS): In a major attack on security forces, two Jammu and Kashmir Police personnel were killed and 12 others were injured when militants fired on a police bus on outskirts of Srinagar city on Monday evening, police said. Police sources said the incident was reported from the Pantha Chowk area, on the outskirts of Srinagar city.

“Two policemen were killed and 12 others injured in this attack. All the injured have been shifted to hospital. The area has been cordoned off,” a source said, adding that the bus was carrying personnel of Jammu and Kashmir Armed Police’s 9th Battalion.

Pieces of glass were scattered everywhere at the site of the attack as the windows of the bus were broken in the firing. It is being said that the police bus was going towards the headquarters.

As per the information, a terror group named ‘Kashmir Tigers’ have claimed the responsibility for the terror attack. However, the security forces are saying that this may be a red herring.

According to the police, the incident took place on Monday evening at Jewan in the Pantha Chowk area. Officials said at least 14 policemen were injured in the attack out of which two succumbed to their injuries. The injured have been taken to various hospitals. Officials said that a search operation is being conducted by cordoning off the area to nab the  militants .

Soon after the incident, CRPF squad and senior officers of Jammu and Kashmir Police have reached the spot. The cases of targeting of security forces in the valley have increased continuously and from the army to the police personnel are being targeted.

Earlier The Kashmir Zone Police tweeted: “#Terrorists fired upon a police vehicle near Zewan in Pantha Chowk area of #Srinagar. 14 personnel #injured in the attack. All the injured personnel evacuated to hospital. Area cordoned off. Further details shall follow. @JmuKmrPolice.” One ASI and a Selection Grade Constable succumbed to their injuries in the attack that took place in the Pantha Chowk area of the city, Police said.( KINS)

JKAP welcomes shifting of Mehbooba Mufti to her home