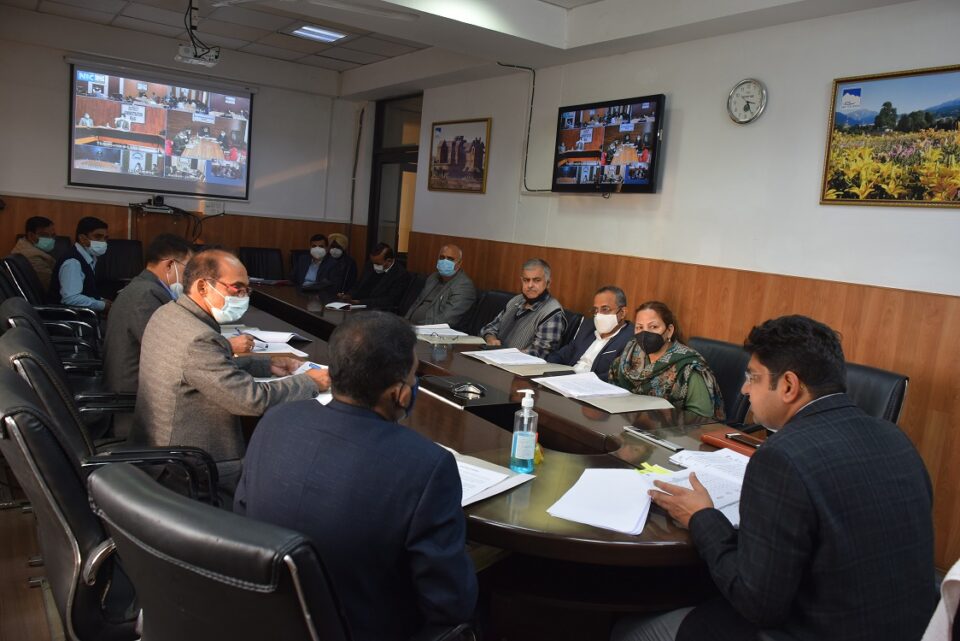 JAMMU, DECEMBER 13 ( KINS) : Divisional Commissioner Jammu, Dr Raghav Langer who is also the chairman of Divisional valuation board today chaired a meeting of Deputy Commissioners and senior officers to discuss revision of Stamp duty rates for year 2022 for Jammu Division.

The Chair was informed that the preparation and revision of Market value guidelines as per SRO 303 2011 and SRO 221 of 2018 by the Finance Department have been initiated.

Threadbare discussion was held on various functions of Divisional Valuation Board and its function. The Divisional Valuation Board will analyze the circle rates of land/ market values proposed by the district valuation Committees and grant the final approval so as to notify the market value guidelines for different areas such as general Value of house sites, type and structure of buildings, classification of land, stamp duty rates etc the meeting decided.

While reviewing the district wise revision of Stamp Duty rates, Deputy Commissioner Doda informed the meeting that the district administration has proposed increase of value over the current year; of residential plots from 33.3% to 73.16% and Commercial plots from 52.38% to 163.74% in urban area, while in rural areas it is average 10%to 40 %.

Deputy Commissioner, Rajouri informed that in urban areas the proposed increase in value of residential plots is 5 to 6% and Commercial plots is 6 to 7.5%.

For Poonch urban areas, the proposed increase value is 11 to 14 % and rural area is 3 to 34 %, the Chair was informed by Deputy Commissioner, Poonch.

The proposed value of residential as well as commercial buildings in Reasi is proposed to be hiked upto 4 to 5% and in the rural areas upto 6 to 36%, was informed by Deputy Commissioner Reasi.

The Divisional Commissioner directed all the officers for personally reviewing the process of Market valuation to finalize the stamp duty rates for the year 2022 of Jammu division.

He also directed for correction of aberration or mismatch in previous rate schedule and clearance of variations in any area and including those areas in the upcoming year rate list, which were left out or missing in previous list while preparation of market value and stamp duty rates. All DCs were directed to seek details of such villages/urban pockets wherein maximum sale deeds/conveyance deeds have been registered by the Sub-Registrars in the current calendar year esp near to infrastructure projects, major highways and growth corridors.

He also enquired from the district officers about land acquisition awards under old & new act, multiplication rate and other financial values.

Dr Langer further asked the concerned to re-visit the rate list of proposed market value and compare with previous three year for various categories of land as per the facilities available like important road networks, other amenities, facilities of irrigation in terms of agricultural land, imp mega projects in the area etc.

Poonch parts shuts ahead of Supreme Court hearing on Article 35A