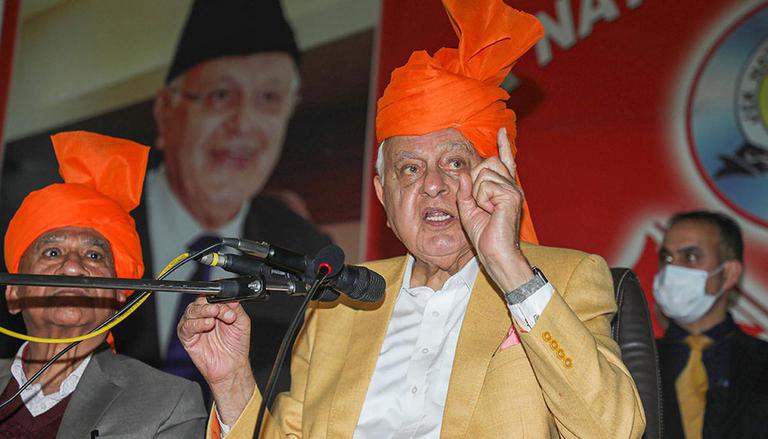 Faizan Ahmad
Srinagar Dec 13 (KINS): After over two years since abrogation of Article 370, political activity has gained momentum in Jammu and Kashmir with political parties holding rallies to garner support of people.
All major political parties including National Conference, Peoples Democratic Party and Congress recently held rallies in Jammu region largely in Muslim majority areas falling under Chenab Valley and Pir Panjal range. Similarly, the BJP is trying to spread its presence in Kashmir and party J&K chief Ravindar Raina recently held several rallies in bordering areas of Kashmir to reach out to the Gujjar and Bakarwal community.
The J&K is witnessing heightened political activities as political parties anticipate assembly elections next year.  The Centre has said elections could be held after the delimitation commission headed by a former Supreme Court judge, Justice Ranjana Desai, finalises its report by March 6, 2022.
The erstwhile state had 87 assembly seats and has now remained only 83 after the separation of Ladakh as a union territory which had 4 seats.
The Kashmir valley has 46 seats and Jammu region has 37 seats.
At present, of 37 assembly seats in the Jammu division, 15 are located in Chenab and Pir Panjal Range which are largely Muslim dominated areas and Kashmir based parties are mostly focusing on them to ensure BJP does not get majority seats there. However, the number of seats could change after the delimitation that will submit its report.
PDP president Mehbooba Mufti was the first major politician from Kashmir to tour Chenab Valley and Pir Panjal range of Jammu region. In her address, she slammed BJP for abrogation of Article 370 and asked people to support her party.
Similarly, senior National Conference leaders Farooq Abdullah and Omar Abdullah addressed many rallies of party’s workers and asked them to strengthen the NC. Omar Abdullah was camping in Chenab Valley of Jammu region for eight days.
“Omar Abdullah asked party workers to strengthen the NC and told them they should be well prepared for assembly elections as they could take place anytime after March 2022,” a senior NC leader told news agency Kashmir Indepth News Service (KINS).
Omar had said that the National Conference would not repeat the mistake of boycotting Assembly elections like it did during Panchayat and Urban local bodies polls in 2018 and said it has learnt its lesson by leaving the field open to the BJP and others.
“They want us to boycott the elections but this is not going to happen. There was no justification for downgrading J&K into a Union Territory except to humiliate and upset the people of J&K,” Omar said in these recently held rallies.
Senior Congress leader Ghulam Nabi Azad’s interest in J&K politics has attracted attention in J&K.
For the last few weeks, he remained in J&K most of the time and addressed his workers. He arrived on J&K’s political scene after a gap of 12 years and seems he wants to enter J&K politics. Azad’s loyalists have asked the Congress leadership to declare him chief minister candidate for the assembly polls.
Azad’s activities have fuelled speculation that he may float a new party if further sidelined by the Congress. On December 5, he said he has “no intention to float a new party but cannot predict the future in politics”.
Azad has been sidelined in party affairs and was shunted out as AICC general secretary in September 2020, after he and 22 other leaders, the group known as G-23, wrote to Congress interim chief Sonia Gandhi for a complete overhaul of the organisation, a full-time president and elections to the Congress Working Committee. He was also dropped from the party’s disciplinary committee last month after a group of leaders considered close to him resigned from party positions in J&K to seek G A Mir’s replacement as JK PCC chief. (KINS)
previous post

Nothing changed post abrogation of Article 370 in J&K: Omar

No attack on Army in Pulwama, failed attempt made to attack mobile patrol: Spokesperson