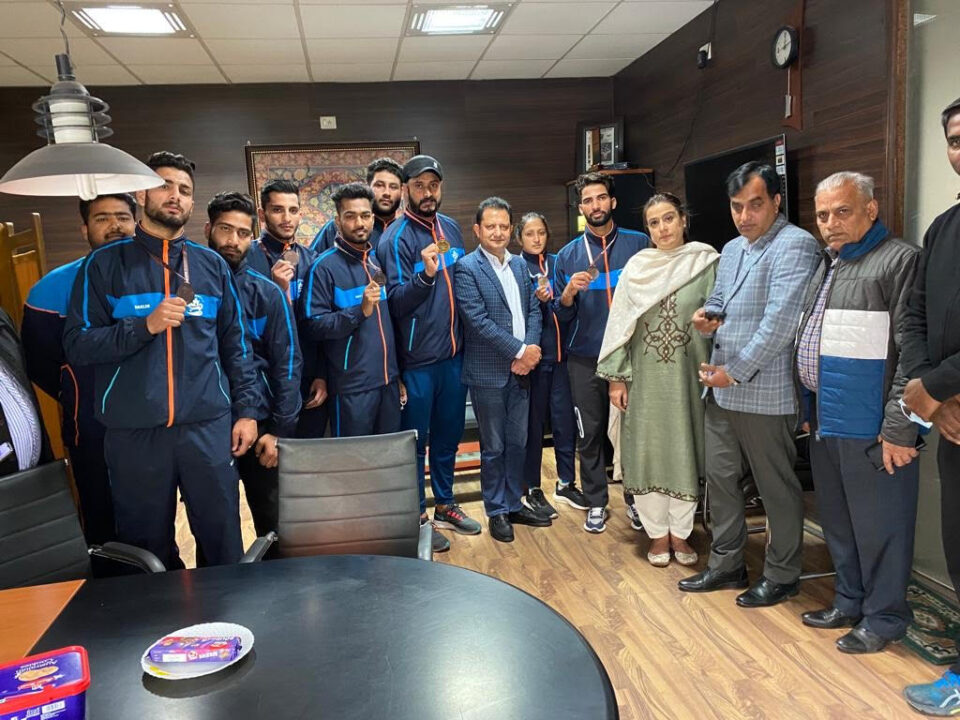 Jammu , Dec 13 ( KINS) In a short function held in the office Chambers, Secretary J&K Sports Council felicitated the medal winners of the Senior National Wushu Championship held at Bhopal Madhya Pradesh recently. Terming this as a token of appreciation for all the hard work that athletes have put in to bring laurels for the union territory of J&K, she rheteriorated the stance of administration to acknowledge all the good work that players, coaches and other team members pool in to shine at any given platform.

Secretary while applauding Ranjinder Singh an ace Wushu player who won the Gold medal for J&K in the event and that too consequently for the fifth time at Senior National championship said, “He is a special talent who requires special attention and I assure him and others sweating it out in the field of all the support on behalf of J&K Sports Council and UT administration.

Pertinently, Raya chib won Silver medal in women’s category while as Ishant singh, Abijeet salathia, Naveed Farooq Mir, Showket Yousuf and Mohammed Maqsood Rather won bronze medals in their specific categories in the event. All the participants were also felicitated by the Secretary Sports Council.

Vijay Saraf, President Wushu Association of J&K thanked the government of J&K for providing the best facilities as well as opportunities to Wushu players for honing their skills and moral boosting all through which eventually paved way for better performance of the team.

Pertinently all the medal winners have been shortlisted for the National Coaching Camp scheduled to be held in Bhopal from 1st January 2022 at ASI Centre.( KINS)

Balance that Pandya creates is crucial for team: Dhawan

We will make sure cricketers are at ease to play game: Sourav Ganguly