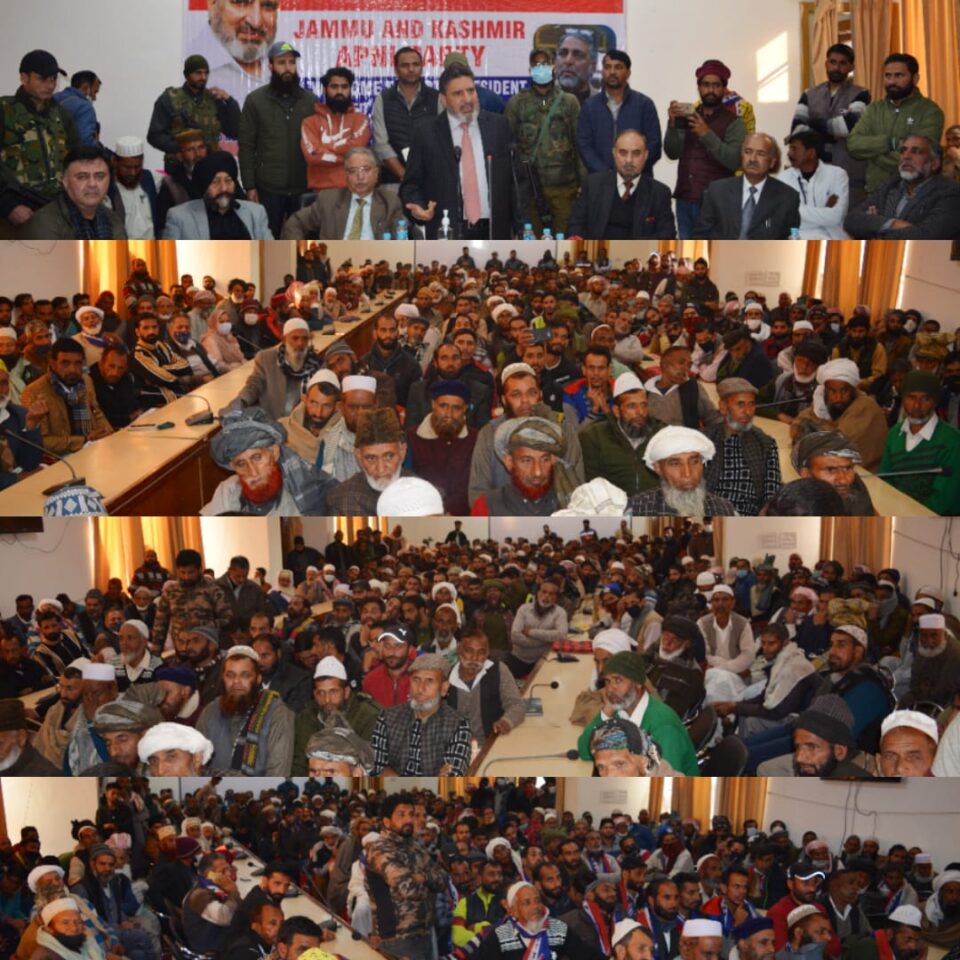 Addressing a well attended one day workers convention at Dak Bunglow Rajouri which was organized by ex-MLA Choudhary Qamar, Altaf Bukhari congratulated the party leaders and workers for their work in Pir Panjal and asked them to take message of party to every nook and corner of Rajouri and Poonch districts.

He in reference to the suffering of people said that it has become imperative to restore the statehood of Jammu and Kashmir which was snatched on August 05, 2019.

“There is a feeling of hopelessness among the people with the officials in administration not listening to the public. The grievances have increased amid no elected Govt in place in J&K,’ he said.

He said ‘To end the public suffering, the restoration of statehood is must before holding of assembly elections.’

He said that the developmental works which were initiated by the previous Govts have come to stand still and the official in civil administration in Rajouri has no connection with the people.

‘The accountability of officials is must and it will come when there is an elected Govt. People are suffering for the want of basic amenities like drinking water, electricity, roads, health etc which should be provided to everyone without discrimination. However, their suffering is not being given heed.

He further assured that if the Apni Party comes to power, every household in Kashmir will be provided 500 units free of cost electricity during winters and Jammu will accordingly get 300 units of free electricity.

He also said that if his party forms the next Govt, they will enhance social welfare pension to the beneficiaries up to Rs 5000 for all categories of the economically weaker section in Jammu and Kashmir.

He also promised that his party will provide additional refill of 4 cooking gas cylinders to the entitled beneficiaries under Pradhan Mantri Ujjwal Yojnana.

He said that Apni Party will work for the development of J&K’s every nook and corner without discrimination.

Expressing his concern over increasing unemployment among the youth, he said that if the Apni Party comes to power, his party will ensure recruitment on all vacant posts.

As far as the long pending issue of daily wager’s is concerned, he said, they are committed to regularizing them.

‘These daily wagers are the backbone in many Govt departments as they have kept the system running even during COVID19. In recognition of their services, we will regularize them,’ he said addressing the maiden one day workers convention in Rajouri.

He said that the administration has failed to keep Mughal Road functional all the months.

“There is a need to put in collective efforts by the administration and the concerned authority managing the Mughal road to keep it open for all 12 months,” he said.

He said that Mughal Road is a main connectivity of the people of Pir Panjal with Kashmir Valley.

Hundreds of people go to parts of Kashmir for job, business, education and health checkup in the hospitals at Srinagar.

“Being a main connectivity, all the possible efforts must be put in to keep it functional in all weather conditions,” he said.

Meanwhile, Vice President Choudhary Zulfikar Ali also highlighted the issues being faced by the people especially with regard to the developmental works which have come to stand still.

He said that the projects started by the previous Govt have stopped and there is no progress so far.

He said that the rural population is the worst sufferer due to poor developmental activities. Ex-MLA Choudhary Qamar also spoke on the occasion.( KINS)