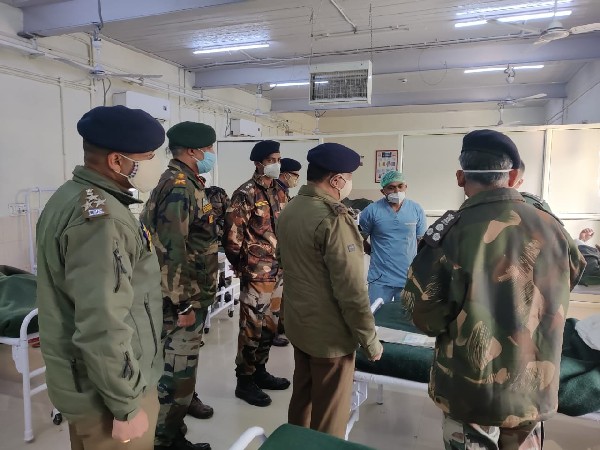 The DGP first visited the place of the incident where a police bus was ambushed by militanst near the Zewan armed police complex.

He later visited the army’s 92 base hospital to enquire about the health of police personnel injured in Monday’s militant attack.

The death toll in the militant attack reached three on Tuesday after another injured policeman succumbed to his injuries, the police said.

The DGP held interactions with the officers and jawans at the armed police complex in Zewan.

During his interaction with the officers and jawans, the DGP paid rich tributes to the police personnel who attained martyrdom in Monday’s militant attack. Two minutes’ silence was observed in memory of the fallen heroes.

The DGP appreciated the jawans for retaliating the militant attack, saying that immediate response avoided what would have been possibly a huge loss. He also complimented the driver for his sensible and quick action during the incident.

He said in the retaliation, one militant was reportedly injured and vowed that the perpetrators would be brought to justice very soon.

He directed the force personnel to use protective gear while on duty for personal safety and take all protection on duty as well as during to and fro travel from the camps to deployment places.

He said, “We have successfully faced challenges in the past and with the dedicated and committed efforts of J&K Police and other security forces, the situation is progressively improving. Attempts are being made to cause damage to the peace and every such attempt would be foiled with fortitude”.

He also interacted with the senior officers and ordered a series of measures to be adopted while making the deployment of the personnel, their travel as well as in other different situations.

The DGP also went to see the police bus which was attacked.

The DGP, along with the GOC of 15 Corps, Lt Gen D.P. Pandey, and other officers met all the injured persons individually and enquired about their well-being. The DGP wished for the speedy recovery of the injured officials.

He also met the parents and relatives of the injured policemen and assured them that all help will be provided to them. He was briefed by the hospital authorities about the treatment being administered to the injured officials.( KINS)

Who Are ‘Kashmir Tigers’ That Carried Out Srinagar militant  Attack

J&K SSB registers highest ever recruitment in 2021-22, since inception

Nobody can touch article 370 : Jethmalani