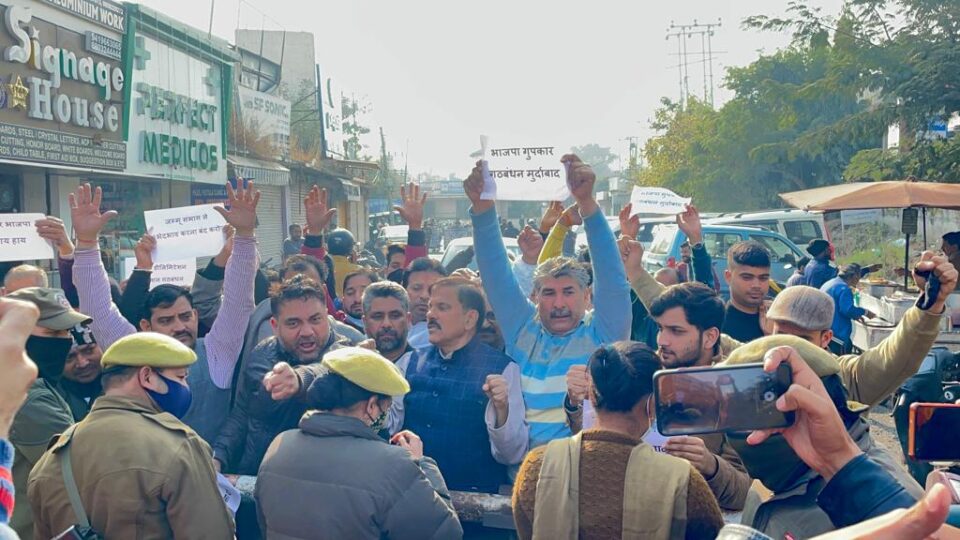 Jammu, Dec 21 ( KINS): Alleging perpetuation of bias against Jammu region in the ongoing delimitation of Assembly constituencies in J&K, the activists of JKNPP led by its Chairman and former Minister held a massive protest at Jammu today. The protesters raised slogans against the central govt and delimitation commission seeking equitable share for Jammu region in allocation of Assembly seats. The agitated activists of the party raised slogans of “ Jammu ke saath bhedbhaav nahin sahenge”, “Le ke rahengey apna haq”, “ Gupkari Bhajpa hai hai”, “ Bhajpa-Gupkar gathbandhan hai hai”, etc. They were stopped by the police on their way to Raj Bhawan amid minor clashes with the security personnel.

Referring to the Draft Report of Delimitation Commission as circulated amongst the Associate members yesterday, Harsh Dev Singh said that it had paved the way for continued subjugation of Jammu region. Allocating 43 seats for Jammu region as against 47 seats proposed for Kashmir was wholly unjustified in view of the norms and criteria laid down in sec 60 og J&K Reorganization Act for delimiting the Assembly constituencies, said Singh. He pointed that even the Delimitation Commission had admitted that apart from population , the process of delimiting and redefining of the Assembly seats would be governed by geographical area, physical features, facilities of communication and public convenience. He said that out of the said factors it was only population factor which weighed in favour of Kashmir region with all other determinants making out a strong case for higher number of Assembly seats for Jammu region. While the population of Kashmir region was merely 12% more than that of Jammu region, the geographical area of Jammu region was almost twice that of former. He said the average size of Assembly constituency in Kashmir was 346 sq. km as against the average size of 710 sq. km for an Assembly constituency in Jammu. Likewise, with a highly tough terrain , lack of communication facilities and public inconvenience due to huge size of Assembly constituencies, Jammu region was entitled to a higher number of seats as compared to Kashmir. In Kashmir region, the Gurez constituency had been created with approx 16000 voters as against more than 1.60 lac voters in Jammu West and Gandhi Nagar constituencies. The BJP govt. had once again chosen to continue with its appeasement policy for Kashmir and kept the Jammu seats lower than that of Kashmir. And rather than assuring the people to rectify the said imbalances, it was trying to justify its pusillanimity by claiming that Jammu had got 6 seats out of seven, added Harsh.

Accusing the Saffron party of trying to mislead the people of Jammu through false narrative, Singh said that these self flattered and narcissistically pleased BJP leaders must know that delimitation was of 90 seats and not merely of 7 seats. “All 90 seats were to be delimited afresh as per the mandate of J&K Reorganization Act assuring justice to each region as per the prescribed parameters. And the fact remains that the BJP and its Associate members have utterly failed to ensure justice to the incarcerated region making it to reconcile with its second class status as ever before”, Harsh said.( KINS)

Ban imposed on use of drones in Rajouri