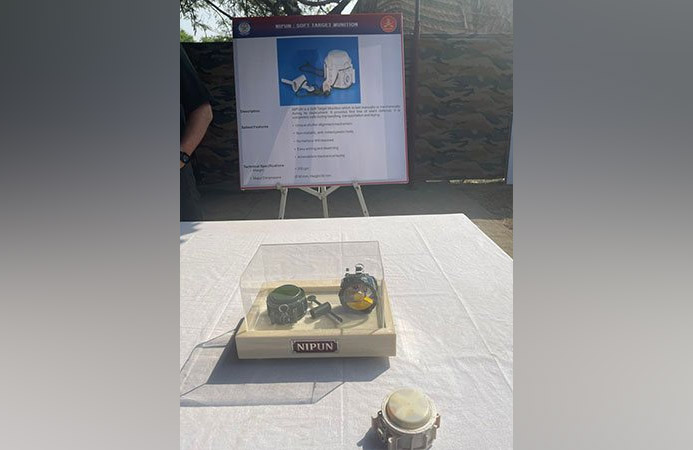 Pune (Maharashtra), Dec 21 ( KINS): The Indian Army is getting new indigenously designed and developed anti-personnel and anti-tank mines which would act as the first line of defence against any attempt by adversaries on the China and Pakistan border to step on the Indian soil.

“Indian Army’s Corps of Engineers getting a new set of anti-personnel and anti-tank mines for acting as the first line of defence against enemy infantry and armoured columns or terrorist trying to infiltrate into own territory,” Indian Army officials said.

The anti-tank and anti-personnel mines are part of a display here where the Corps of Engineers is showcasing the indigenous equipment that has been inducted into the Army by it for carrying out operations against the enemy and defending its own areas.

“Indian Army is going to induct 7 lakh indigenously developed ‘Nipun’ anti-personnel mines which carry a potent mix of RDX,” an Army officer said. He said the mine has been developed by an Indian firm in partnership with the DRDO.

For taking care of the enemy tank regiments, the corps of engineers is carrying out trials of the Vibhav and Vishal next generation made in India anti-tank mines.

These highly effective mines have been developed for the Indian Army by DRDO, and are at an advanced stage of user trials. The new anti-tank mines have greater stopping power against enemy tanks due to their advanced design and sensors, Army officials said.

Prachand, Ulka and Parth are also some of the new mines that are coming up for induction into the services in the near future, the sources said.

The Indian Army has also started the induction of the high head water pumps to provide water to troops deployed on the high altitude areas along the Line of Actual Control with China,

“Indian Army started inducting 200 high head water pumps which can help pump water and fuel to locations at higher altitudes in those areas. 200 of these pumps are being inducted into the Corps of Engineers under the emergency procurement powers,” said the officials. (KINS)

Pakistan only country that acknowledges Kashmiris’ right to self-determination: Geelani