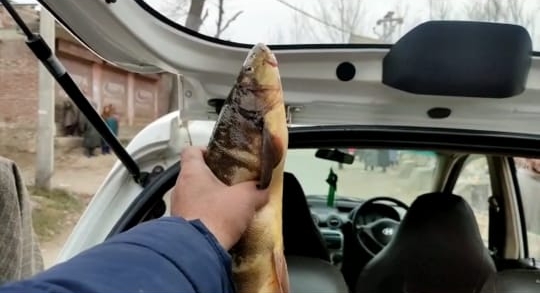 Anantnag Jan 12 (KINS): Intensifying its drive against poachers, field staff of Fisheries Department has apprehended at least nine people and recovered Rs 89,000 as compensation from them for fishing illegally in several streams of Anantnag and Kulgam district.

An official told news agency KINS that field staff of Fisheries Department of Anantnag and Kulgam are on toes to ensure there is no illegal fishing in various water bodies of these two districts.

“We recently apprehended nine people who were fishing Trout on Brengi Nallah and Lidder River of Pahalgam area. We have recovered a compensation of Rs 20,000 and Rs 69,000 from them respectively,” the official said.

The official said that they have taken undertaken from poachers and that they will not indulge such activity in the future.

“We are regularly monitoring all the streams to avert any incident of poaching. We have also confiscated fish and a car used by poachers recently to ferry the fish. We ask people to avoid going for illegal fishing. Poachers won’t be spared at any cost. Strict action will be taken against them,” Wani added.