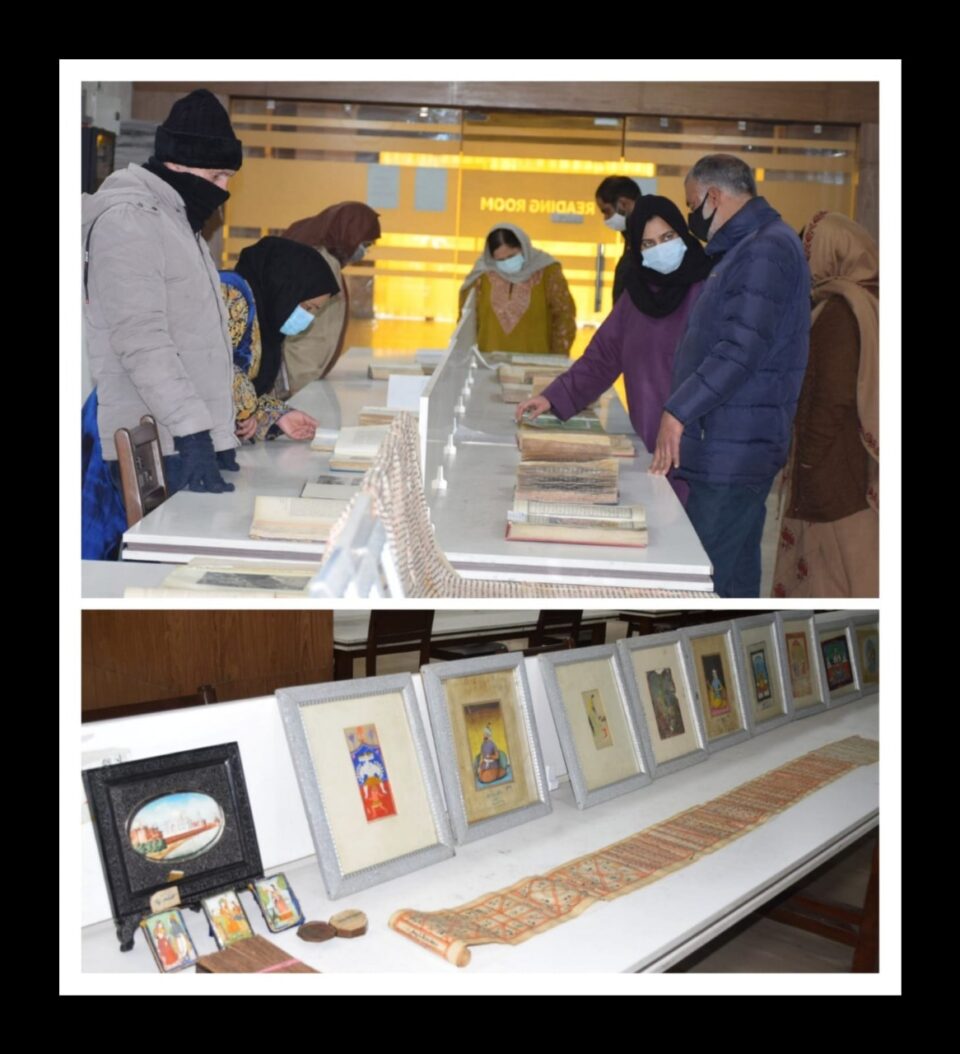 SRINAGAR, JANUARY 20: An exhibition of historic Manuscripts, Rare Books and Miniature Paintings was organised at SPS Library Complex here today.
The day-long exhibition was jointly organized by the Oriental Research Library Srinagar and SPS Library, on the directions of the Director, Libraries & Research, Mr Mohammad Rafi, to commemorate Azadi Ka Amrut Mahotsav.
The attraction of the exhibition was the oldest manuscripts like Qarabai-Din, Sadh Pand Luqman and Shahnama Firdous. Some of the rare books including Rajtarangni by Kalhanna,Tareekh-e-Rasheedi, Gazetteer of India and Kashur – a history of Kashmir were also displayed at the exhibition.
Speaking about the exhibition, Assistant Director, Research & Publications, Mrs Zahida Bano said that the Oriental Research Library (ORL), Srinagar established in 1904, is a repository of around 6000 centuries old rare manuscripts in 17 languages encompassing varied fields.
She said the manuscript collection of ORL is a treasure-trove of religious, philosophical, historical, literary and scientific writings. Mrs Zahida said that due to COVID Protocol restricted number of visitors were invited to the exhibition.
The collection, she said, is rich in classical languages like Persian, Sanskrit and Arabic. These languages have left deep impression on Kashmiri language by conditioning its growth in terms of forms and scope, she said and added that the Sanskrit, language of court and culture in 9th and beginning of 10th century in Kashmir contributes number of religious, Aesthetic and poetic articulations and are preserved in the ORL.
Mrs Zahida said that the collection can prove valuable to the literary, religious and scientific scholars to outgrow from small circles into wider circumferences of socio-cultural interaction. “Some manuscripts on Geometry and Medicine could also help to reveal the unfold truth and discoveries,” she said and added that such exhibitions will also make our young generation aware about, the culture, traditions, heritage and history of Jammu and Kashmir.

Health check up of students begins in Govt schools of Kashmir, winter zone of Jammu division

No people from Pakistan came to attack CRPF convoy in Kashmir: Swami Agnivesh

Cold intensifies in Jammu and Kashmir, Ladakh; Leh records minus 14.4